A quick post and something of a product endorsement.

For more years than I care to remember I have been strapping things to my bike with bungie straps, a length of elastic rope with a plastic-coated metal hook on each end.

They can and do snap, and with use the plastic coating gets worn and the now exposed metal bits can damage the bike’s paintwork. 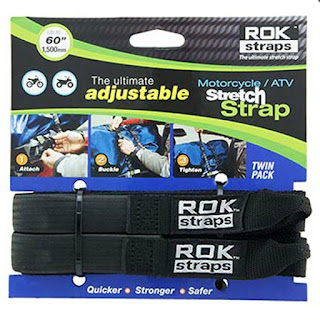 On a recommendation from a friend, I bought some “Rok Straps”. These are regular nylon straps with an elasticated mid-section that you anchor to your bike by looping around a secure point. 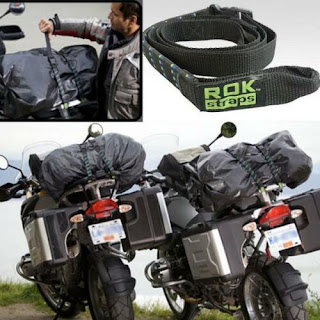 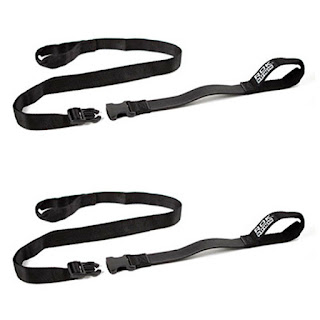 My bikes mostly have racks and panniers so this is not a problem for me. If you have a modern sports bike you might have to get a little creative. 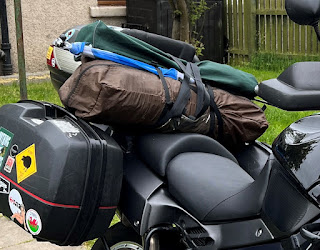 I used them for the first time last weekend and they worked as well as advertised. Easy to attach, easy to use, and no likelihood of damaging the paint.

If you are looking for something to tie your gear down you could do worse than try some yourself.

I needed an early start on Saturday for an event I was attending in Inverness. However, as Inverness is a good three hour ride away, rather than being forced to set off at dark o’clock, I decided to work a camping weekend around it. I asked about and had the site at Bunchrew Caravan Park recommended to me. A quick phone call and I was booked in for two nights, Friday and Saturday.

Now, I haven’t been camping in over three years, for obvious reasons, so I dragged out all my kit, rummaged about to find what I needed, and loaded up the panniers that had been stacked in the back of the shed for the same length of time. All set for the morrow.

As I didn’t need to be in Inverness for any particular time I had a bit of a lie-in, a late breakfast, and then a leisurely run up the A9, stopping just the once at the Ralia Café just north of Dalwhinnie for a bit of a break.

Filling up in Inverness once I arrived was another wallet-emptying experience. The joy of a bike with a 25 litre tank.

The campsite is located a few miles out of town on the shore of the Beauly Firth, and the area for tents is next to the shore giving you spectacular views out over the water.

With no hotels or pubs nearby I had brought my own food and some whisky should I feel like it later. With the weather being bright and sunny it was nice just sitting and looking out over the water and reading a book. There are worse ways to spend your Friday night.

Saturday was spent on a run up the east coast, and I’ll post about that separately later.

Back at the site it was more of the same, although the wind got up a bit in the evening forcing a few folk to rig extra guy ropes and dropping the temperature a bit.

Sunday morning, all packed away and another gentle run back down the A9. This is actually a rather pleasant road if you’re blessed with warm weather and a Sunday morning’s lack of traffic. And all too soon I’m home and the weekend is over.

A smashing weekend away, I must get the tent out a bit more this year. A trip further afield may not be out of the question either. Pity there’s no guaranteeing similar weather.

The only downside to staying on a big campsite like this, however, is that you are at the mercy of whoever rocks up and camps next to you. An awful lot of people don’t seem to realise that tents aren’t soundproof, so loud (drunken) conversation into the wee small hours, along with radios blaring, are a nuisance if all you want to do is enjoy the tranquillity and/or get some sleep. I just put in some earplugs and tried not to let it bother me overmuch.

Email ThisBlogThis!Share to TwitterShare to FacebookShare to Pinterest
Labels: Camping, Italian Motorcycles, My Motorcycles, Out & About

A week ago I did a run up to Fort William on the big Aprilia with some friends. We met up at Stirling before heading west to Crainlarich and up the A82 to Fort William. 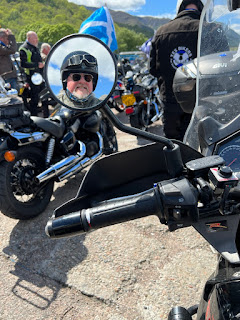 This is a road that I am extremely familiar with. In fact, it’s where I did my first big run on a bike more years ago than I care to mention (see link). 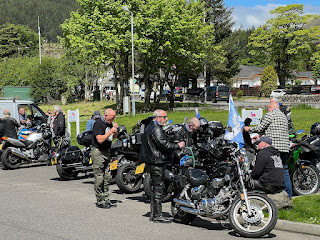 We stopped once for lunch at Tyndrum and again for fuel at Ballachulish, just after exiting Glencoe, before pushing on to Fort William. 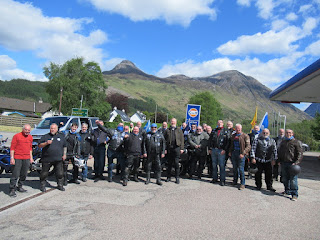 It was a pleasant run in bright sunshine, which was a welcome bonus. It’s not always this pleasant weatherwise on the west coast, even in summer.

When it was time to head home it seemed a shame to just retrace my steps, so I decided to head a bit further north to Spean Bridge and cut across country to Dalwhinnie and from there head down the east coast to Perth and eventually home. 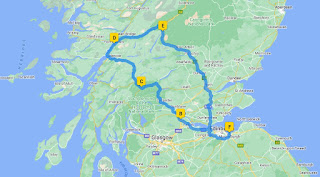 So, that’s what I did. Total distance for the day worked out at a little over 300 miles. A thoroughly enjoyable day out on the bike, if a bit tiring. Hauling a big bike around for hours at a time can be like a full body workout. 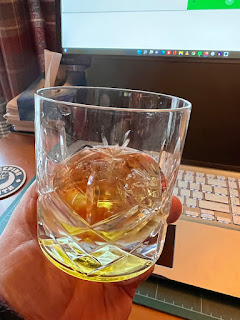 I think I deserved to put my feet up and relax for the rest of the evening with a nice cask strength Highland Park whisky for company.

Email ThisBlogThis!Share to TwitterShare to FacebookShare to Pinterest
Labels: Italian Motorcycles, My Motorcycles, Out & About, Politics 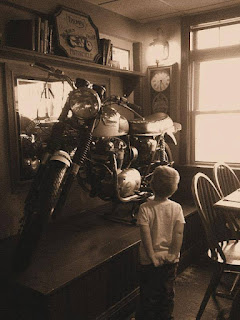 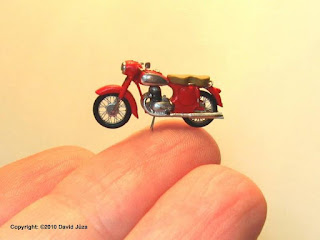 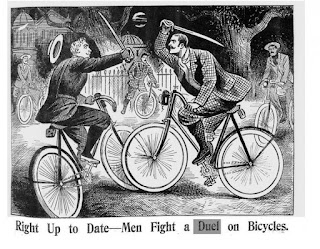 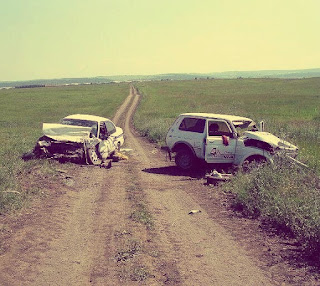 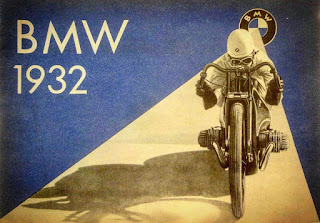 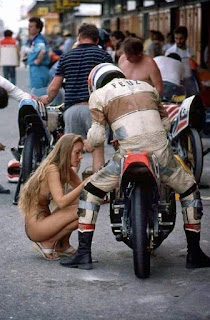 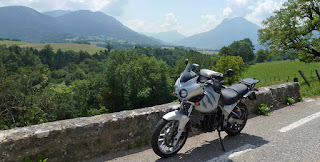 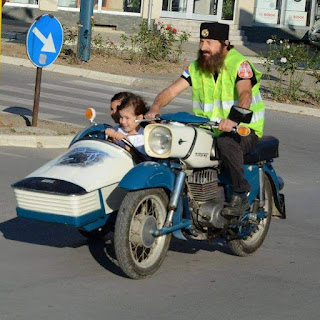 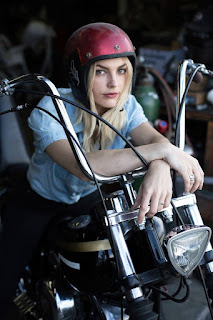 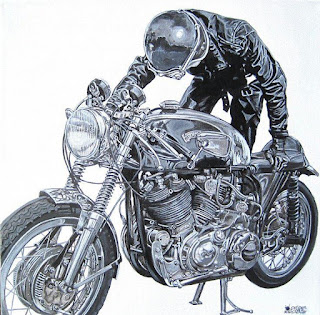 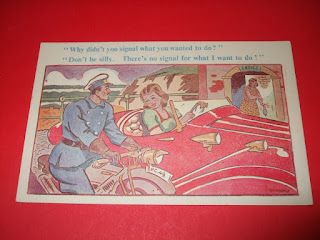 Been a bit busy recently so haven't managed out on the bike much, although I did manage a quick run down to Moffat in the Scottish Borders to meet up with some friends who were holding a rally there. 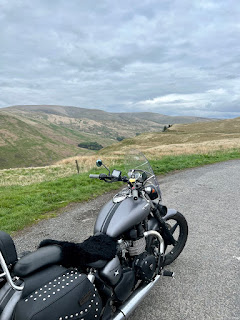 Met up with some folk I hadn’t seen in a while and caught up with what had happened to them over the last two years or so. 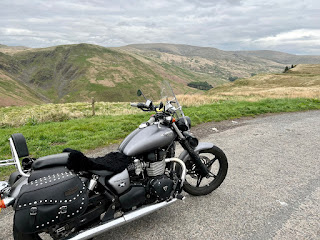 As I wasn’t staying I headed home again just as it was turning dark.It had been a pleasant enough ride down, but turned cold as the sun sank. Glad to get home and warm. 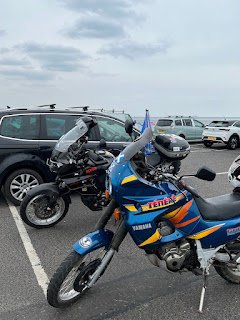 Went for a run along the Fife coast with some friends yesterday. Decided to take the Aprilia and give it a longish ride to see if there was anything I should be worried about after its long lay away. Other than some oil weeping from the oil filter housing it performed as it always has, so that is a relief. 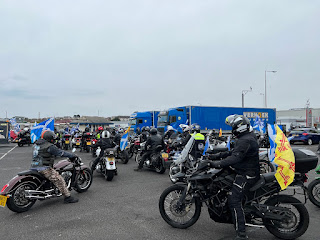 Pretty typical day. It started with one of the other lads being pulled and fined by the police for displaying a ridiculously small illegal numberplate. About 20 minutes in someone fell off and had to be recovered home in ignominy. And, although the day started bright and sunny, tempting me into wearing my new denim jeans with armour inserts, it slowly became overcast and eventually it started to rain. Lucky I had waterproofs then. Unfortunately, they were in the panniers on the Triumph sitting dry in my shed and I got soaked on the ride home. 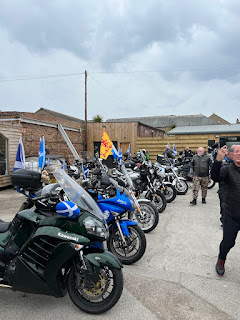 One thing I did note. I felt quite vulnerable only wearing jeans while on the motorway. Armour aside, I think I’ll keep them for short local rides and keep wearing leathers for anything further afield. 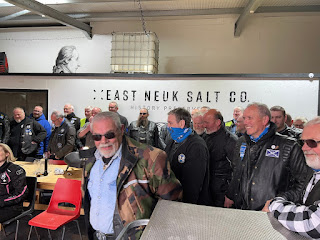 We dropped in on Darren the proprietor of the East Neuk Salt Company to say hi and help publicise his small business which sees the production of the first commercial salt in Fife for two and a half centuries. Please feel free to take a look. 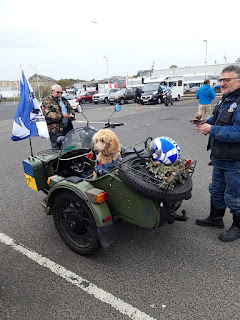 We ended up at Anstruther Harbour but, as the rain was just starting, rather than stay and maybe get something to eat, I decided not to hang around and instead headed the bike for home.

A longish day spent riding the coastal route at a leisurely pace, only spoilt a little on the way home because of the rain. Hoping to get a lot more riding done this year.