About a week ago I mentioned that I needed to order up some more fasteners as I was getting low. 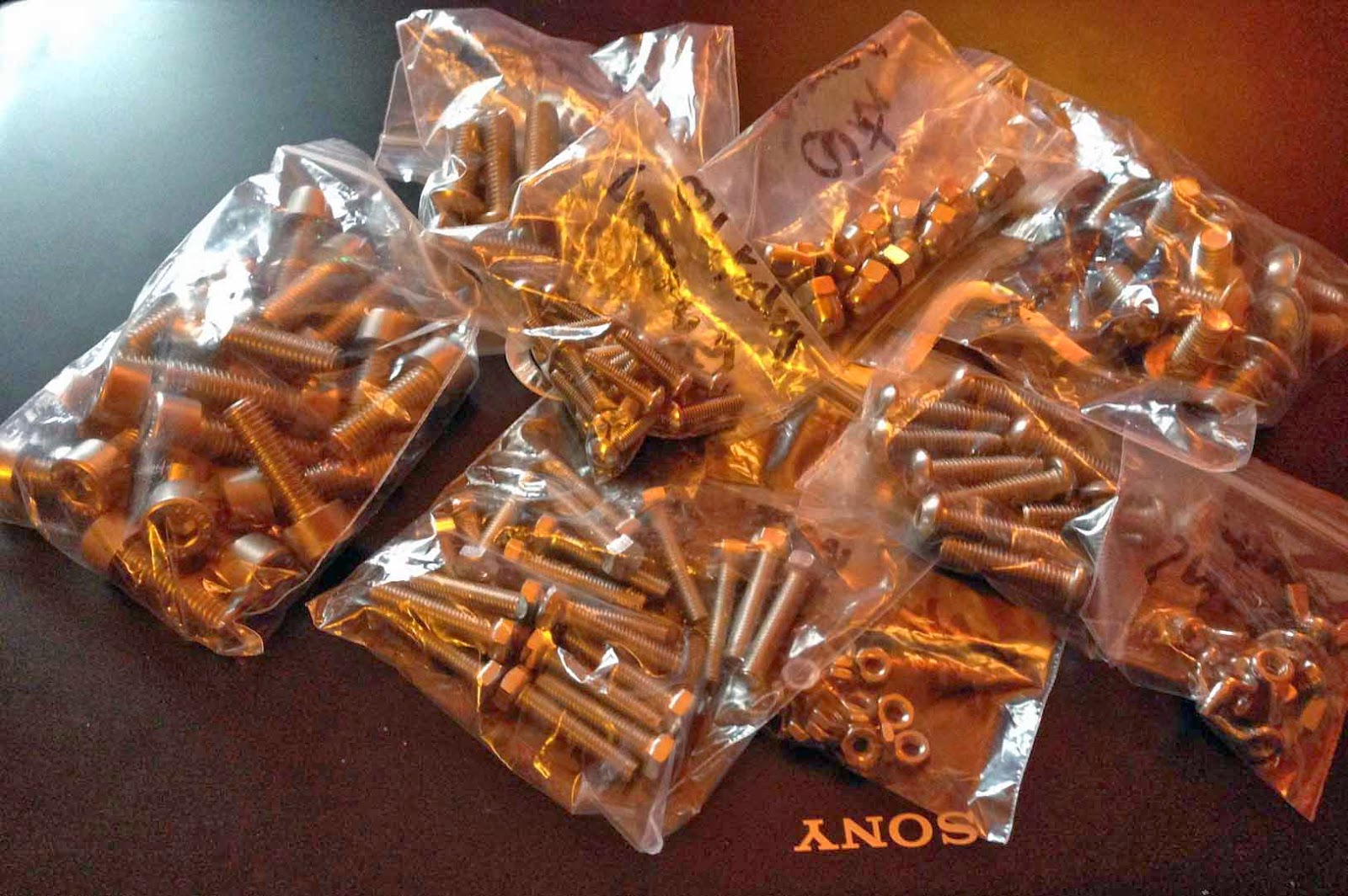 Well, today the first of my orders arrived. A dozen or so bags of assorted stainless steel nuts & bolts in varying sizes. The rest of the order should arrive sometime later this week.

Unfortunately, I'm running out of excuses for not actually doing any work on my bikes.

A quick trip to Eclipse Motorcycles in Tranent this evening on the way home from work.

They are a small local bike shop who advertise themselves as a Royal Enfield dealer and a friend wanted to know if they had a demonstrator that he could book a test ride on.

Unfortunately for him, they don't. They can get you a bike if you want to buy one, and the spares to keep it going, but you'll have to sort out a test ride elsewhere.

Anyway, they call themselves The Scooter Centre, and that is where their main interest seems to lie.There were loads in the shop and in the workshop. I was rather taken by the groovy colour-scheme of one outside in the yard (see left of picture). 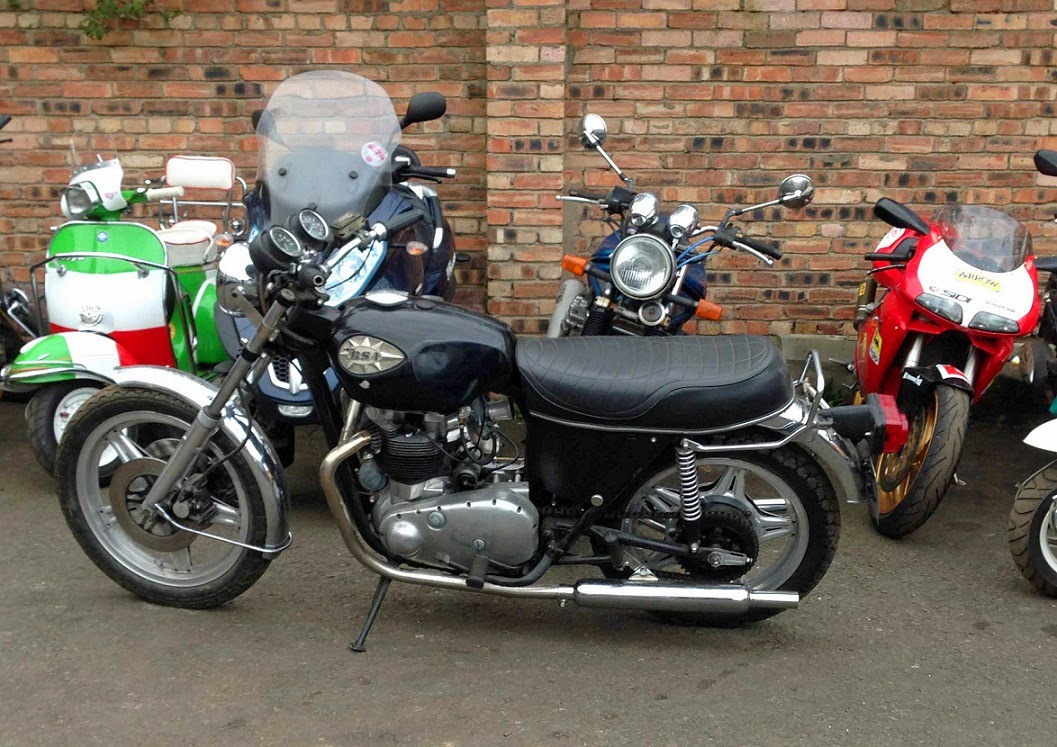 In amongst the more modern Japanese middleweights in the yard there was this rather well-used BSA (sporting a Triumph dual seat) which was in for a service and they also had a Honda race bike in the window.

So, a bit of everything. I suppose that's what you have to offer if you're a small shop. Pity they didn't have that demonstrator, though, I'd probably have booked a ride myself, just for the craic. 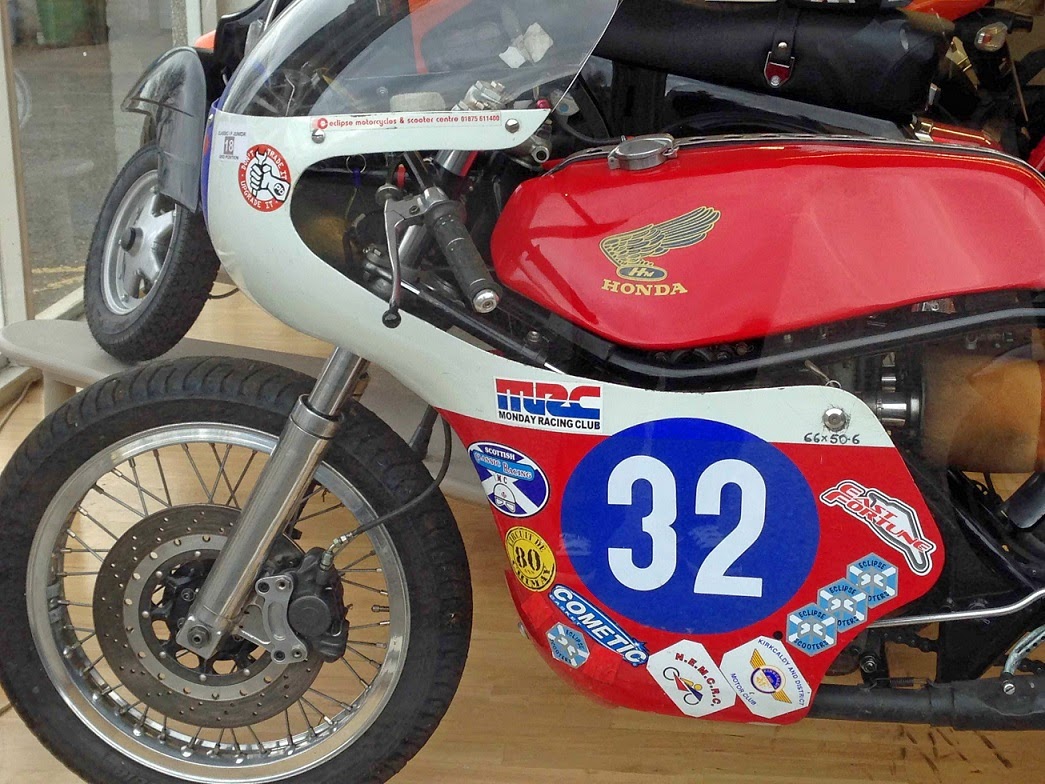 
This weekend I spent some time trying to tidy up my shed. I have gotten tired of not being able to find something that I know that I have, somewhere, in all the mess. What is infuriating is having to go out and buy something, and then finding that you already have one, or more, already.

I had bought myself one of those shelf-mounted bin storage tidies and fitted it above my work surface on Saturday. Then I went through all the various polythene bags, jars, tins, boxes and drawers that I keep nuts and bolts in, sorted through them all, and then put them into separate tubs so that I can actually find them when I need them. In doing so I noticed that I have less of some sizes than I thought I had, and more of others, so I'll have to put together an order for more fasteners sometime soon. Oh, goody, more stuff to find it's way into the shed.

After that I had a rake through all the big boxes of spares and sorted them into more manageable lumps. All the MZ, Triumph and Dnepr bits went into boxes and tubs by make, and then what was left over got divided up by use, ie. clocks, bodywork, electrical, etc.  Once I put it all back on the shelves (and the floor, and on hooks hanging from the roof) the shed was still as cluttered as before, but, and it's a bit but, I now know where most things are. Now, if I can only stop buying more stuff in the meantime.

Next up will be an actual sift to decided what I'm keeping and what I can get rid of. For example, I have a lot of Triumph Sprint stuff lying around. As I no longer have the bike, do I really need a nearly new silencer and enough parts to do about three full services? Probably not. However, every time I convince myself to actually get rid of stuff I find myself needing some of it later on.

I am, by nature, an inveterate hoarder. I keep stuff long past its useful life, just in case it might come in handy. For those of you nodding your head at this, you know what I mean and can probably sympathise.

I reckon that it's something that gets worse as you get older. All that useless junk which is taking up considerable shelf space is clearly going to be tomorrow’s valuable classic. It will also be worth a small fortune if you do keep it long enough. At least, that’s what the small voice in your head keeps telling you whenever you make plans for giving it away or simply taking it to the nearest tip.

You know that you've probably gone too far when you find yourself planning to get another shed to keep the overflow in! 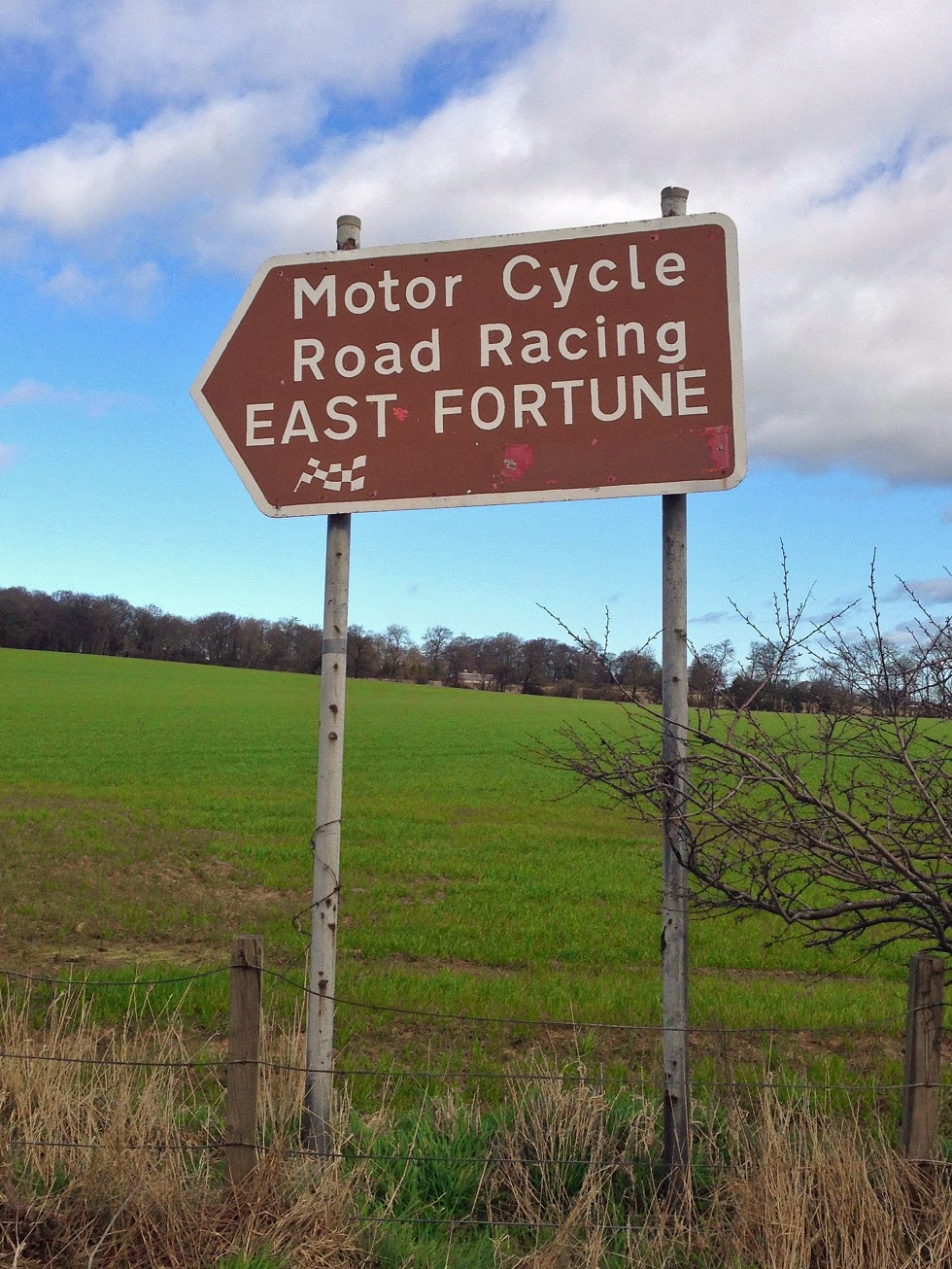 
Time for a new battery for the Triumph Tiger. I have no idea how old the one in there was, but there has been an increasing hesitancy when turning over recently so I decided to ditch it and get something new. 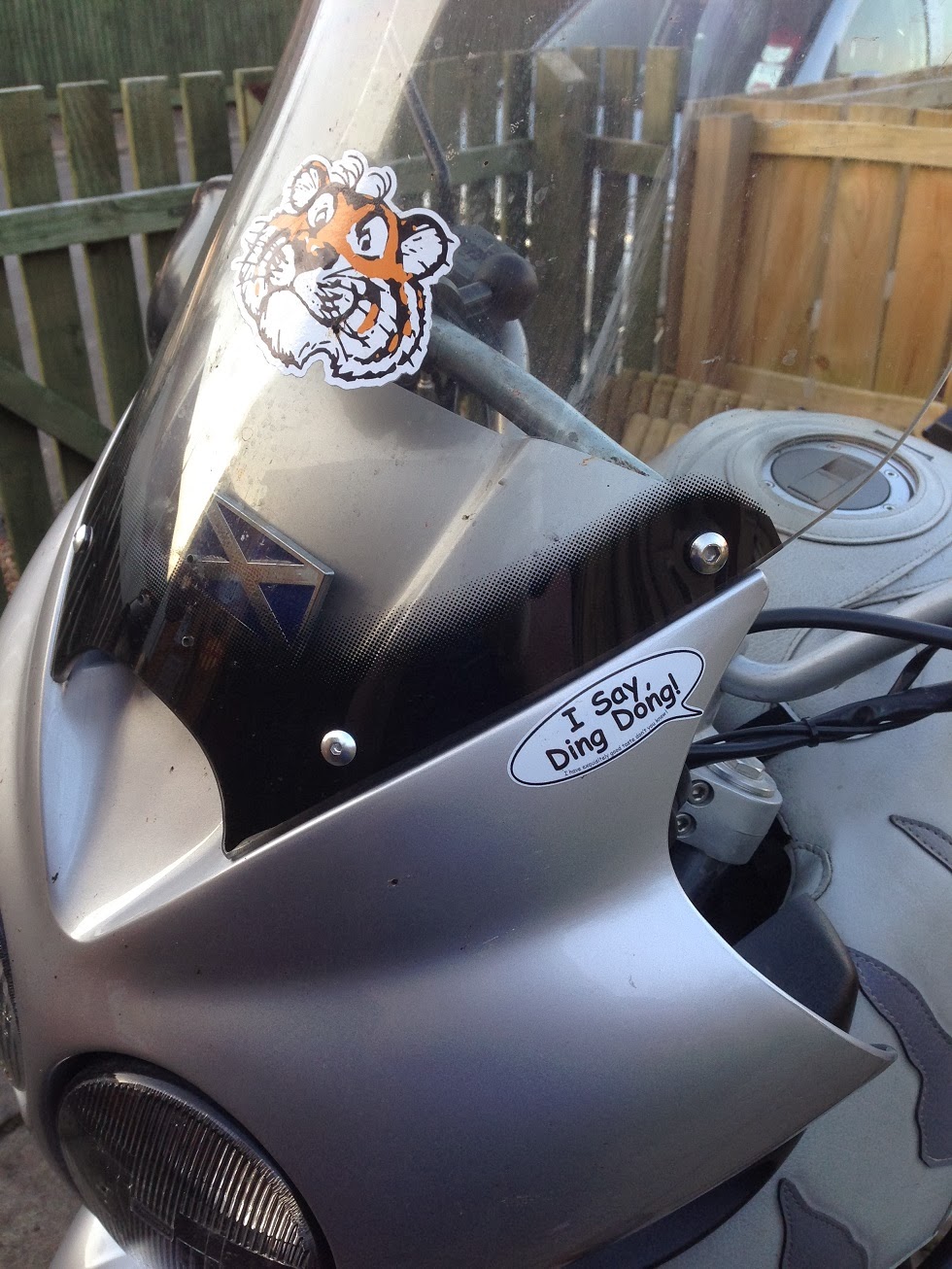 As I was quite happy with the performance of the new Motobatt I fitted to the Skorpion a while back I decided to buy one for the Tiger too.

Ordered it from eBay on Monday and the parcel arrived yesterday, Tuesday. Not too shabby. I dragged the bike out after work tonight and fitted it in about five minutes.

One of the nicer touches with a Motobatt is that you get a small packet in the box along with the battery and this contains two terminals and a handful of bolts to fit them.You can then choose which side to fit your terminals.The terminals are also multi-sided so that you can play around with the fit of these as well.

Once installed it turned over first time straight out of the box. Who could want for more? 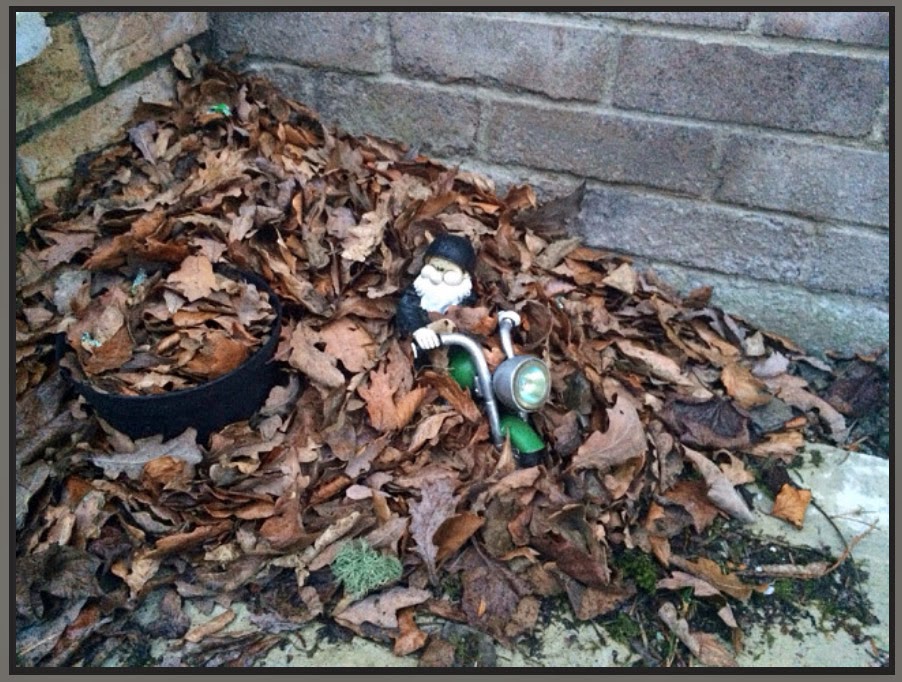 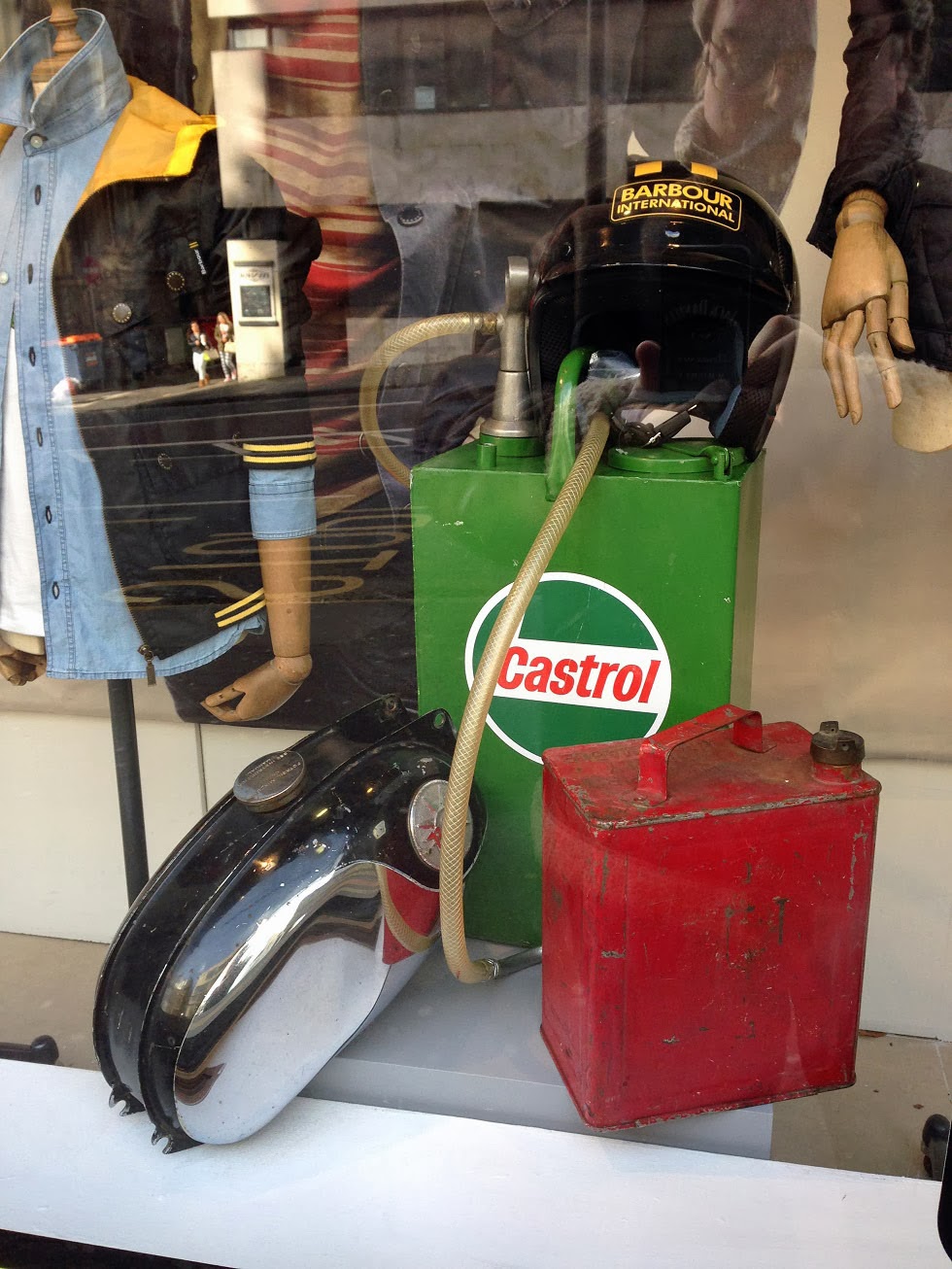 This is a display in a department store window I passed today in Edinburgh city centre. You can just about see that the fuel  tank has a BSA badge on it.

It’s for a range of very expensive Barbour clothing, which has nothing to do with motorcycling, but still likes to play on its image to help sell the products.

Until the Last Rebel 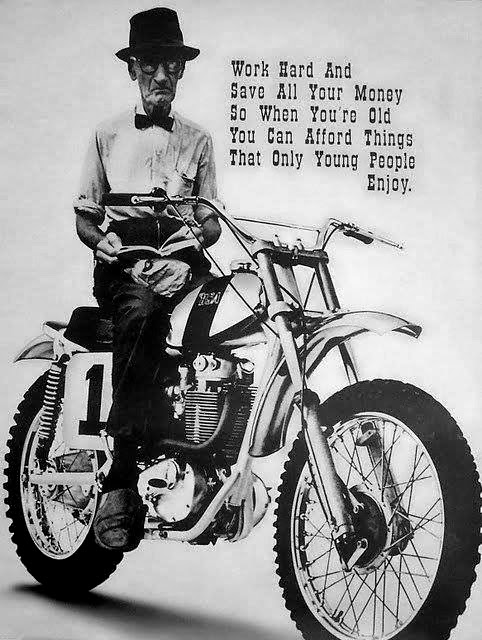 
There are a huge number of magazines and books out there extolling the virtues of 'adventure travel'. A strange new phenomenon which seems to usually involve a novice rider going somewhere strange on their bike, getting into difficulties and being thoroughly miserable, before coming back home again and writing a book about how brilliant it all was.

In fact, next time you pass your local BMW dealer I would guess that more than half their stock falls into the 'adventure' category - GS, Paris Dakar etc. Buy the bike, and all of the lovely expensive accessories from Touratech, and you too can be a 'proper' adventurer just like Ewan and Charley, even if you never go further than the café in town. Image, it seems, is everything. Something that Harley-Davidson has known for a good long while.

A good example of this phenomenon is Adventure Bike Rider magazine. A copy of this fine periodical that I read recently included numerous stories of derring-do, some in exciting foreign parts, adverts for the most eye-wateringly expensive kit I’ve ever come across, a number of ‘how-to’ articles on everything from what to wear to where to go and, my personal favourite, survivalist nonsense in case you are ever stranded far from civilisation and need to make a fire or drink something other than your own urine.

Seriously, I sometimes think that this sort of thing must actually put off as many folk as it inspires. Who really wants to contract dysentery while riding a broken-down wreck on un-surfaced roads through a war-zone with the very real possibility of being shot at? I'll give it a miss, thank you.

For the moment, I’ll stick to travelling in countries which have indoor plumbing and are not currently engaged in a civil war. Places which are not too dissimilar to the UK, except for the fact that it's far away, the food is a mite different and you can't always communicate with the locals. But then again that can be true of going to Yorkshire for the weekend!