I was in London last weekend, but before heading home on the Monday morning I decided to pop along to the Ace Café for some breakfast. I'd never been before and admit to being a tad curious as it is a name that you hear bandied about quite a lot on the classic motorcycle scene. I wanted to see what all the fuss was about. 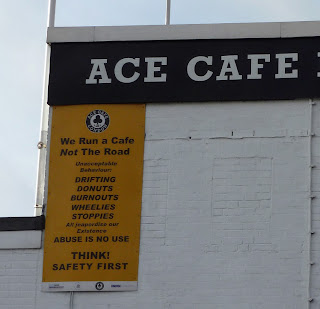 Using public transport it was relatively easy to find. You exit the Underground station, turn right onto the old North Circular Road, and it's a five minute walk away. 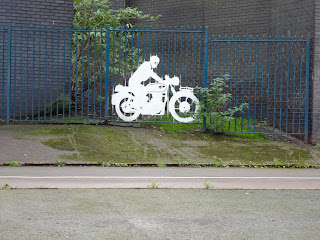 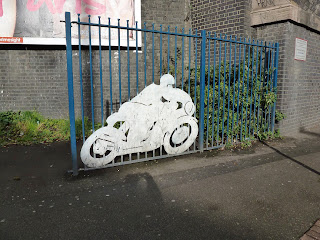 As you approach it you come across these metal figures which help allay your fears that you've taken a wrong turning somewhere. 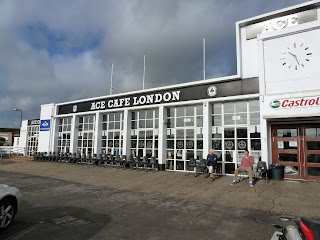 The first thing that strikes you on seeing it is how big it is on the outside for a former transport café. The actual café part inside is smaller, with a service counter which runs pretty its entire length. 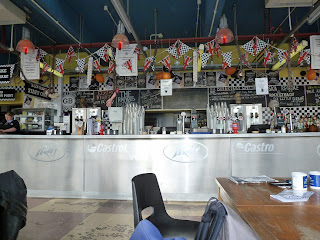 There's also a small gift shop and a raised area at the end where bands play on evenings and at the weekends. 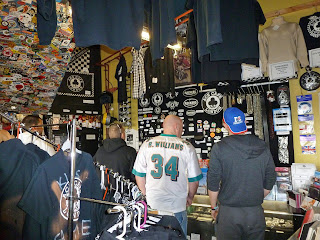 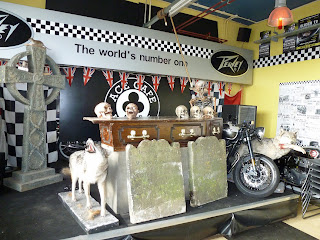 This area is flanked by a couple of old British bikes including this beautiful Triumph Metisse café-racer. 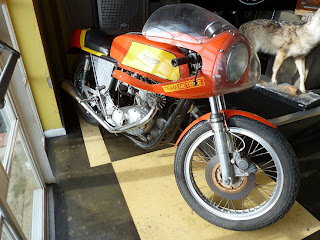 The food on offer tends to be of the hearty variety, heavy on the cholesterol and portions on the generous side, as befits it's history as a place much frequented by lorry drivers and bikers. That said, I thought the prices weren't unreasonable and we certainly had no complaints about the quality of our breakfast. 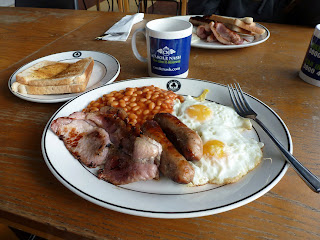 Unfortunately, being a Monday morning the place was quiet and the carpark fairly empty, although a couple of modern bikes did arrive as we were eating. I think that it would be more worthwhile to pay a visit on one of those days when there is an event on, or on an evening when there is a band playing as it would presumably be much busier. 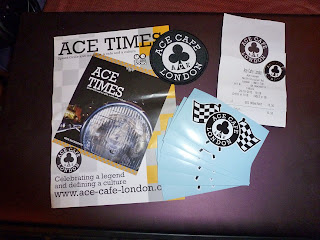 Having cleared our plates and finished our tea, it was time to head for the airport and home, but not before treating myself to a few bits and pieces from their shop. Well, it would have been silly not to.
Posted by mr.combo at 20:45 4 comments:

As you might imagine, there’s a tale behind these photos.

They were taken at a rally held at a rugby club that I attended a few years ago. Someone asked if they could have a go on this quite tidy Jawa 350 sidecar outfit as they'd never ridden an outfit before and were considering buying one. Being a nice chap, the owner said yes. 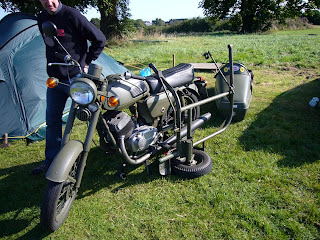 The newly-fledged sidecar pilot trundled around the rugby pitch for a bit gaining a bit of confidence, as you do when nothing goes wrong. He then decided he'd better turn around and come back so he rode the bike between the uprights of the goal posts and began to turn around, unfortunately forgetting that he had a sidecar attached to the bike he was riding.

Yes, that’s right; he rode into one of the uprights! Luckily, the sidecar was mostly undamaged (see the scrapes in the third picture), but the chassis and mounting brackets got bent somewhat. 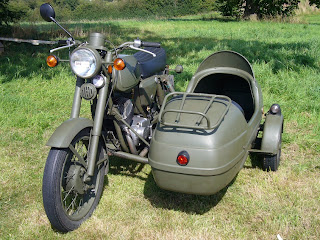 The only option was to take it all apart, fix the damage and put it all back together. This with a selection of borrowed tools, on a rugby pitch, surrounded by interested onlookers giving quite contradictory, but well-meaning advice. 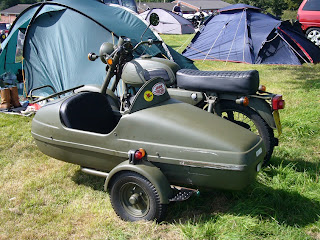 This is what happens when you’re trying to do something like that in a hurry!

Email ThisBlogThis!Share to TwitterShare to FacebookShare to Pinterest
Labels: Touring

The petrol tank shown on the bike below is not an orginal fitment and I'd like to identify it if I could so that I can get another petrol tap (petcock) for it. 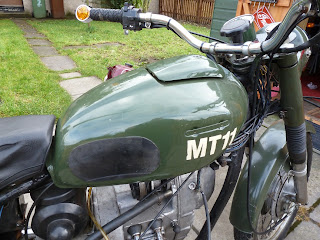 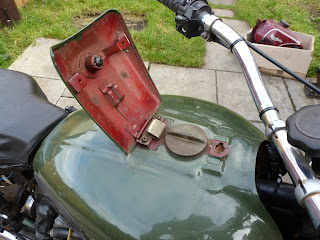 I have a suspicion that it might originally have been from an old British bike, I just don't know which machine it might be off and was wondering if anyone had any ideas. 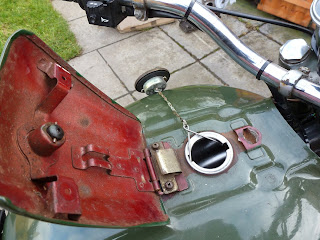