He Shoots! He Scores! 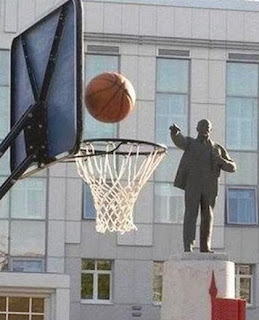 I have no idea if Lenin ever played basketball, I just liked the picture and it sort of fitted in with the latest developments at Chateau des Thistledown.

In a fit of madness brought on by cheap drink and easy access to the Internet (eBay)  I've just bought myself a 1997 Dnepr  MT11 solo done up in a faux military colour-scheme (see picture below). I used to own one about twenty years ago and have had a hankering for another Soviet-built machine for a while now. Initially I had been looking for a cheapish Ural, but couldn’t find one at a price I was willing to pay so gave in and bought the Dnepr instead. I’m planning on collecting it next weekend so you’ll have to wait until then for more pictures.

These machines, built in Kiev in the Ukraine and not in Russia, were produced until the factory finally closed its doors earlier this year for what looks like the last time. I’m hoping that spares aren’t going to be too much of a problem. They did build these things for the best part of 60 years after all.

Now all I need to do is buy myself a furry chapeau.