Further to my earlier post, the new battery for the big Aprilia arrived yesterday, a sealed one from the Motobatt range offering increased output to aid starting. I have used these in the past on other bikes and have never encountered any problems with them. 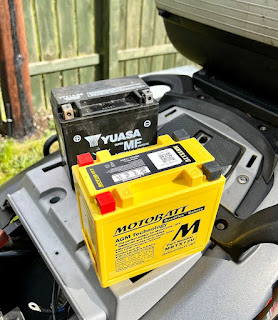 Replacing the old battery should be a ten-minute job but, as is the way of things, took significantly longer, due to the narrowness of the area in which you have to work and all the other cables and wires which get in the way.

Eventually it was done. Seat back on and a quick run through of the dashboard settings, the clock and the trip meter(s), and making sure that all of the various electrical add-ons worked etc.

Although it says that it comes changed and ready to go, I stuck it on the charger overnight to be on the safe side.

This morning after sorting out the necessary insurance I set off to see about putting it through a MOT (annual inspection). 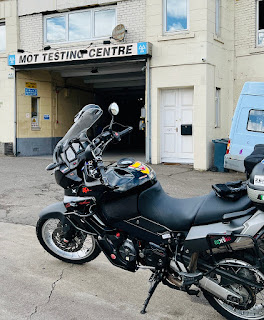 Half an hour later it had passed, with one advisory – the numberplate bulb had blown and needed replaced. The bloke at the testing station trusted me to go away and sort this myself, which is more accommodating than some of the folk I’ve had dealings with over the years.

I now actually have two roadworthy bikes for the first time in who knows how many years.

Now all I need to do is sort out some place(s) to go on them.

Staying with the military theme, on the way home I came across this stone marker with the Royal Air Force (RAF) logo and motto on it on the approach to a nearby village. 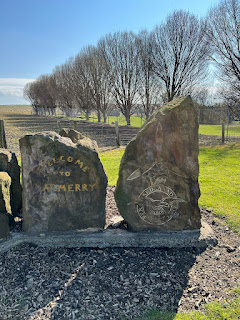 It celebrates the former military airfield which used to be located nearby.

Email ThisBlogThis!Share to TwitterShare to FacebookShare to Pinterest
Labels: Monuments, My Motorcycles, Out & About, Triumph Motorcycles

Maybe because of the coastal defences that I mention in an earlier post, war was on my mind. 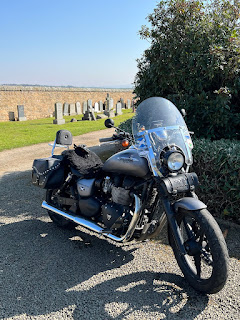 Which might explain why I felt inclined to stop off at a small, neat cemetery on a back road near Dirleton in East Lothian that I don’t remember seeing before.

Inside, amongst the normal mix of headstones of local people you’ll find a neat row of 23 headstones for servicemen from the British Commonwealth who died during WWII and are buried far from home. 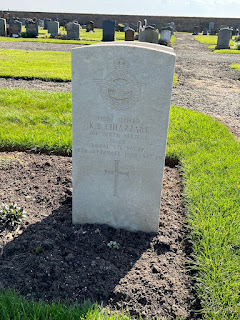 Each is marked with the arm of service of the deceased, their name and some relevant details. Unsurprisingly most were navy and air force personnel, as we are on the coast here and there were wartime Royal Air Force (RAF) airfields nearby. 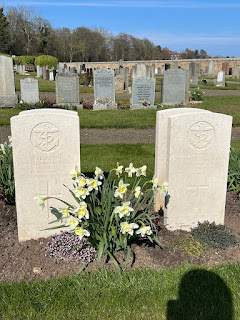 They were all so young, they range from 19 to 26 years old, an age at which I was finishing University and trying to work out what to do with my life. These lads never got that chance. 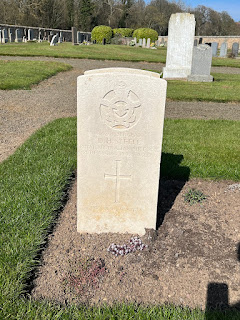 Since the sun was shining, and I had a rare midweek day off, I decided to go for a short trip along the East Lothian coast on the Triumph, avoiding the motorway and staying on smaller roads. 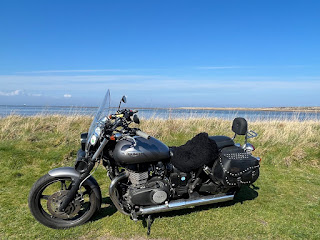 Being a Monday traffic was virtually non-existent and I could bimble along at whatever speed took my fancy just enjoying the rare peace and quiet. Following the coast road, I stopped to take some photos of some of the concrete WWII tank barriers sprinkled along the shoreline. 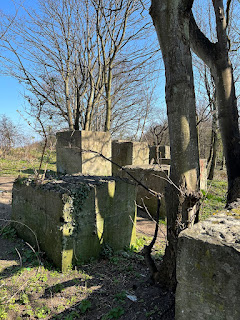 These can be found all along the coast, running from the shoreline back to the road. 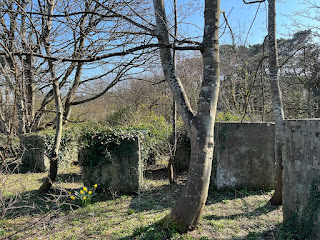 Installed to prevent a German Invasion, many of these barriers were built by Polish soldiers who were stationed hereabouts at the time. 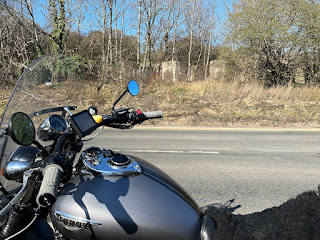 After the war most of the other coastal defences, the emplacements and buildings, were eventually removed over time, although there are a couple still to be found here and there if you look carefully. 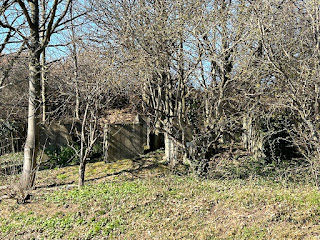 The tank traps have mostly been left alone, forgotten and overgrown. Remnants of a not so long ago conflict. 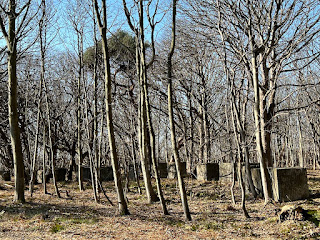 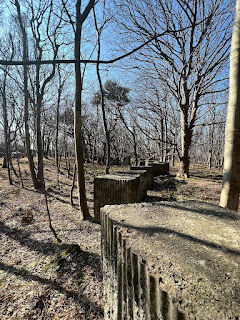 The ones in the forested area are particularly eerie. 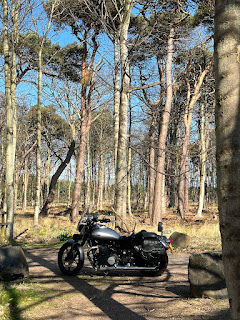 Blowing Off The Cobwebs

After a winter of inactivity, I decided that I wanted both of my big bikes on the road this year. 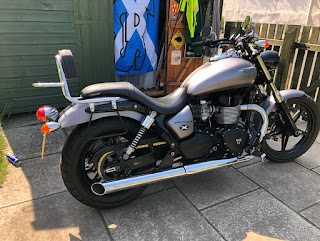 First up was the Triumph Speedmaster. This was simplicity itself. Gave it a bit of a once over, blew up the tyres, freed of the brakes which were binding a bit, and toddled off to see about an MOT (annual inspection ticket).

Passed with no problem, much to my relief. 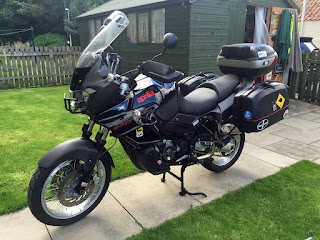 The Aprilia Caponord needed a bit more than that as it hasn’t been on the road for a few years now. Intermittent problems with the hydraulic clutch saw it overlooked in favour of the Triumph.

Time to sort that out.

Same as the Triumph, blew up the tyres, and freed of the brakes. However, this one needed a full service before it can be used, and I needed to address the niggling problem with the clutch. 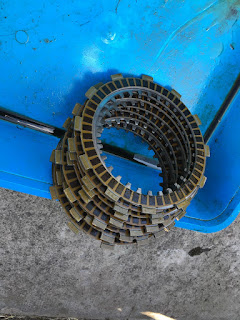 Easiest option was just to fit completely new clutch plates and some heavy-duty springs, which I’m hoping should stop the hassles I was having. This was relatively straightforward and required an oil and filter change as well. 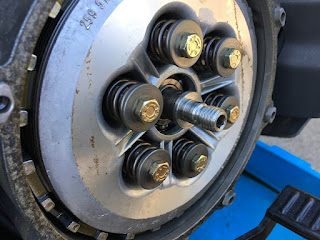 A bit annoyed that the brake and clutch fluid didn't arrive when it was supposed to, so doing that is on hold right now. Although, as they seem to be working well enough, I may actually leave off doing that for a bit.

I have had to order up a new battery as the present one isn't holding a charge. On checking the paperwork, it was fitted in 2016 and has spent the last two years on a trickle-charger, so I guess I can't complain.

So, one down, one still to go.