I took a trip down to Stafford for the big Classic Motorcycle Show at the weekend having scored a free weekend exhibitors pass courtesy of some friends in the MZ Riders Club.

The plan was to drive down early Saturday morning, take in the show and pick up a few bits and pieces, go out for a meal and a few beers with some friends, then camp overnight and drive back on Sunday afternoon.

Everything went according to plan and here are a few pictures of what sort of fare was on offer.


I drove down to Moffat in the Scottish Borders to pick up our new dog this morning, a chocolate Labrador puppy my wife has decided to call Charley (there's a motorcycle theme going with our pets, dogs called Brembo and Saxon and a cat called Two-Stroke. This one is named for the MZ Charly electric scooter). 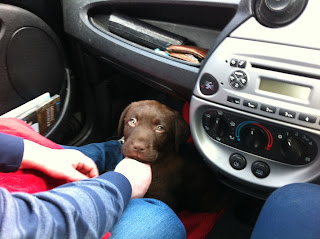 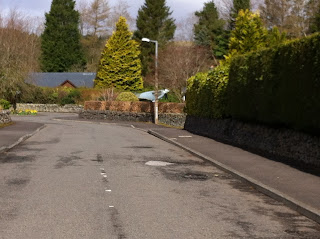 On the outskirts of town I caught sight of a strangely familiar shape through the bushes. I followed it up and discovered the strangest garden ornament I have ever come across. 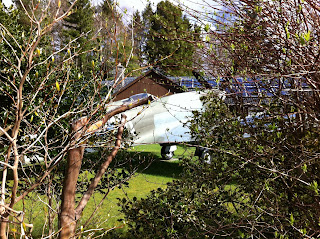 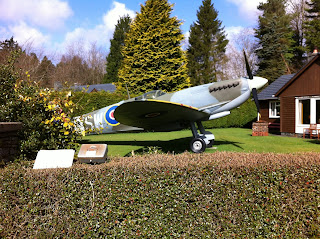 Beats a garden gnome any day! 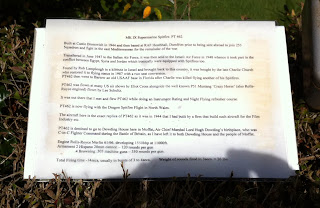 I Shall Say This Only Once! 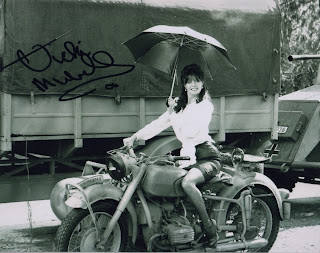 Actress Vicki Michelle on the set of the BBC TV show, 'Allo, 'Allo!


(signed picture from eBay)
Posted by mr.combo at 16:51 No comments: 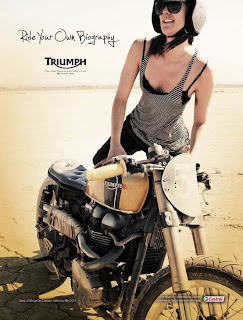 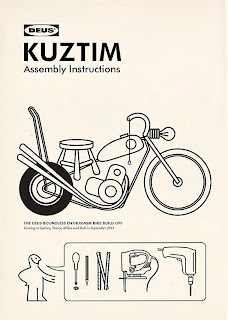 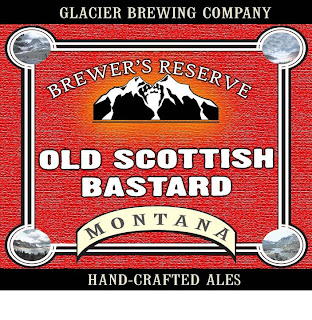 They named a beer after me?


I’ve got a couple of longish trips lined up for next month, so I decided that it was time to give my MZ Skorpion Tour a bit of a service. Nothing too major, just the small routine stuff that need doing periodically. I also decided to take a look at my other Skorpion, a Sport, which hasn’t turned a wheel in a few years. Five, as it turned out, when I checked its last tax disc. 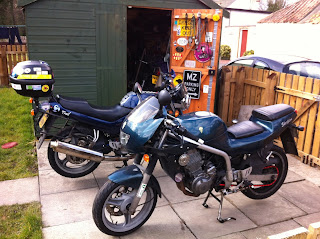 I mentioned my plans to Norrie and Terry and they both decided to come over and give me a hand. In fact, they both ended up elbowing me out of the way and doing much of the work between them (that’s why it’s me taking the photos). Thanks, guys. I guess that it’s not often you get the chance to dismantle someone else’s bike without repercussions.

Anyway, Saturday morning saw me haul both Skorpions out of the shed into the daylight. Easier said than done, I’m afraid to have to admit. I really do need to have a serious clear out over the summer months! The Tour held no great surprises as it has been getting some use recently, but the Sport was in a bit of a sorry state. The climate hasn’t been overly kind to its alloy, which had gone ‘furry’, and many of the fasteners were rusty, but nothing major, I hope. When the others arrived we set to it.

Actually, with all three of us familiar with servicing Skorpions it took less time than you would think to change the oil, the filters and plugs, and check the valve clearances on both bikes. One good thing about so many folk working on two different machines was that we didn’t really have to hang about too much. While the oil was draining from one we could move onto the other one and do something with that. Before you knew it we were finished.

Now was time to see if the Sport would actually start. Without a battery of its own the simplest option was to borrow some jump leads and hook it up to my car.

With some fresh petrol it started after a little hesitation and eventually settled down to a nice quiet, healthy tick-over. I was, to be honest, frankly amazed that it was that simple after all this time. It looks like MZ knew what they were doing when they sourced the engines from Mr. Yamaha.

Now that I know it runs I’ll need to get it its own battery and tidy it up a bit before deciding if I want to keep it or to move it on.

Job done we adjourned to the house for tea and sandwiches and to plot our next move with regard to our trip to France in July – watch this space. 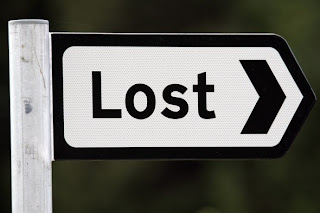 Last year's photographic challenge seemed quite popular and I was asked if there was to be another one this year. I must admit to having run out of ideas for actual places or, as was done last year, particular items, so after a bit of thought I came up with the list below.

As you can see, this one will give you plenty of scope to use your imagination. The only rule is that the photo must somehow, no matter how tenuous, be linked to motorcycles or motorcycling. Once again you have until the end of the year to complete it. So, get out and about and be sure and let us see the results.

Even if you don't complete the whole list, please let us see any photos that you do take. You can send them directly to me and I will post them here or, if you have a blog of your own, you can post them there and send me the link.

As an incentive, this year I'm going to offer a small prize. I’ll pick a couple of the best photos and send the photographer something. I don't know what this will be as yet, but I'm sure that I can come up with something suitable, and small if the photographer comes from overseas!

Without further ado, here are this year’s ideas for photos:

If you'd prefer something more concrete you can always try your hand at last year's list instead. Details are here.