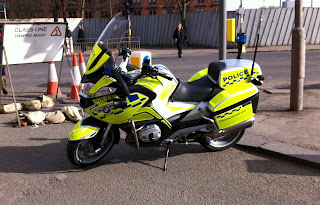 After the football in Glasgow this afternoon I spotted a few police motorcyclists directing traffic and the like. They were all mounted on BMW R1200s, where I was more used to seeing Yamaha FJR 1300s. None were sporting the usual Strathclyde Police badges, or any badges at all in fact.

Then I remembered. All the separate regional police forces in Scotland were merged on April 1st of this year into a single force, the Police Service Scotland. Doubtless the next time I see one it will have a new set of badges on it reflecting the unitary police authority.