About ten years ago I was Regalia Officer for the MZ Riders Club in the UK. What that meant in real terms was that I sourced and sold the club’s t-shirts, badges etc. Every now and again I would also buy batches of hard to come by spares as, before the widespread use of eBay and the internet to buy spares online, certain items were nearly unobtainable, or were ridiculously priced if you could find them.

I once managed to get a batch of about twenty pairs of rubber chain-gaiters for the MZ ES250/2 Trophy and Trophy Sport from a company in Germany through a friend who worked over there. These were unobtainable in the UK at the time and, although they were quite expensive, they were correct size and meant that owners of these bikes could fit the proper sized item rather than having to cut down other ones to fit. 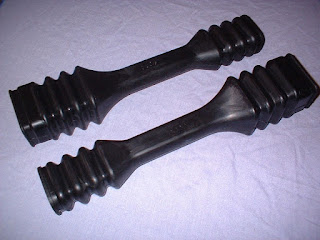 After selling about half of them I was told by a friend that he thought that Silk used the same size gaiters. I contacted the Scott Owners Club to see if any of their members who owned a Silk might be interested, and was unsurprised when they didn’t bother to respond. MZs are rather looked down upon by the classic bike brigade and I was sort of used to this sort of attitude from the days when I ran a club stand at the Scottish Motorcycle Show.

However, they must have mentioned it to someone, because a few weeks later I got an email from a Silk owner interested in a set. He had been looking for some to finish off his fully restored bike for ages and was keen on getting hold of them if they would fit. He didn’t even blink at the price.

As I wasn’t 100% certain that they would fit, and in the interests of fairness, I offered to take them back if they were the wrong size and refund him the purchase price. He accepted and I parceled up a pair and sent them off.

A few days later I got an excited email from the bloke who said that not only did they fit, but that the serial numbers stamped on the new ones actually matched those on the scabby old pair he had removed. He was more than happy and sent me a couple of pictures of his bike so that I could see how they looked. A very happy, satisfied customer.

He, in turn, must have told others of his good fortune as shortly afterwards I received an order from the Scott club for as many pairs as I had left!

If you look at pictures of Silks online you will note that many of them seem to be missing the rear chain enclosure and/or the rubber chain gaiters. So, it seems that these are still a difficult item to lay your hands on.