Many years ago my wife decided that she wanted to learn to ride a motorcycle.

She took and passed her CBT (Compulsory Basic Training), which allowed her to legally ride a bike on the road. Now we needed to get her a bike and get some practice in so that she could get her full license.

We eventually settled on a brand new Yamaha SR125 as it had a relatively low seat height, which suited her. It was a nice little bike, if a bit under-powered and boring, even compared to other Learner 125s on the market at the time.

After giving it a go she decided that motorcycles weren't going to be her thing, so I ended up pressing it into service for my commute to and from work before pushing it into the back of the shed where it was pretty much forgotten about.

Fast forward to earlier this year when I was asked to get the bike roadworthy as she wanted to let her brother have it once he passed his CBT. Oh, and I had about a month to get it ready as he had already booked his test date.

What could be simpler? Drag the bike out of its hiding place at the back of the shed, check it over, make a list of everything that might need sorted, order the bits up, do all the work, service it, and then get it through an MOT (safety inspection), and all in a matter of weeks. No problem, no pressure. 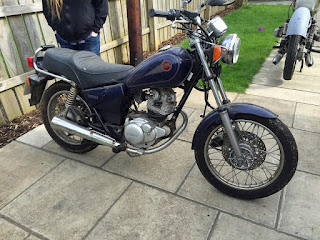 First things first, uncover it from where it has been sitting unloved all of these years and roll it out onto the driveway for a good look.
First impressions were reasonably favourable. It was all there, which couldn't be said of all of the bikes I've worked on over the years. It had been new when we bought it, and it had done so few miles in its brief life that nothing had ever needed doing to it. So, no prior abuse at my hands, or those of faceless bodgers who'd owned it previously.
However, as you'd expect from something which hadn't been on the road for 16 years there was a lot of dirt and rust from simple neglect. I removed all of the bodywork to get a better look, and emptied out the old petrol from the tank. All found, it was in better condition that I had hoped. 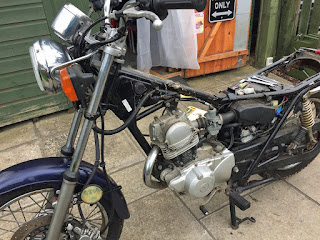 I started a list of bits needed; new battery, a new chain & sprockets, along with cables, filters, plug, oil, and front and rear brake pads/shoes, as well as some new fuel line and a pair of rubber dust seals for the fork legs, the old ones having split. Not the longest shopping list by any means that I've compiled in trying to get a bike back on the road. 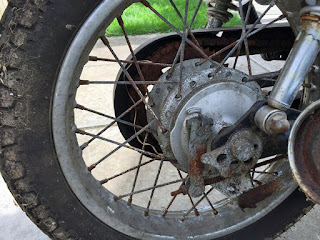 So, down to work. Over the next few weeks I worked my way over the bike cleaning what needed cleaned, buffing off the worst of the rust with a wire brush, and painting a few bits and pieces that could do with smartening up. 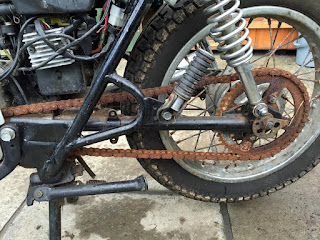 At this point, the only real problem I encountered was needing to order up a three-legged puller to get the front sprocket off as it was just a mess of rust and stubbornly refused to shift. 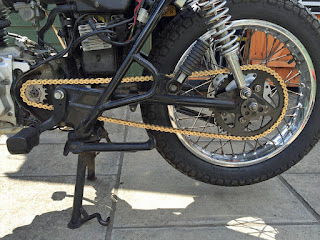 The new battery got fitted and all the lights &c. worked as expected. However, I couldn't get it to start. It turned over, erratically to be sure, but wouldn’t actually fire up. This was, I admit, a bit of a bummer but, luckily for me, and unfortunately for him, my brother-in-law had an accident and broke his wrist. He wouldn't be needing the bike for a while yet, so the pressure was off for the moment.

By a process of elimination, it appeared to be a combination of a faulty ignition switch and some sort of problem with the fuel supply, the plug wasn’t getting wet. I had given the carb a good clean to try and shift the treacle-like substance which had accumulated in the float bowl, but it looked like that hadn’t been enough.

One new ignition switch later and a more thorough cleaning of the carb, along with putting everything back to factory settings, a capful of fuel down the bore, cross my fingers and try again.


It started. That would be the first time in over a decade that it had ran. Still a bit rough, but it was actually running. Disappointingly, at this stage I couldn’t get it to idle properly, so there were still some issues to be resolved, but I was heartily cheered.

I removed the carb again and took it over to a friends. He has one of those ultrasonic cleaning baths and I reckoned this would probably shift any crud that I’d missed. Half an hour or so in that and the carb came up like new. Fitted back on the bike it fired up and settled down to a nice even tickover. Result.

Next big job was the front brake. This came apart surprisingly easily given the amount of rust present. I cleaned it up, painted the body as it had lost most of its original paint, reassembled it with new pads and seals and fitted it back onto the bike. New fluid and ten minutes later it was working perfectly. Almost too easy. 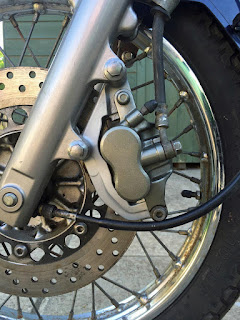 Everything was then reassembled and I took it for a few spins up and down the road to make sure that everything seemed to be functioning properly. As I couldn’t find anything else wrong with it I booked it in for its first MOT in 16 years, which it passed with flying colours.
With that out of the way, I made up some new brackets and fitted a small fly screen that I had lying around and added the necessary L-plates that my brother-in-law would need to ride it on the road. It was as ready as I could make it.
So, on a particularly wet and windy day about a week ago he came over to collect it and ride it away to its new home. It was odd to see it go, having spent so much time with it recently, but as he’s already looking to fit a rack & topbox I guess I will be seeing it again soon.

What now? Well, there’s a bike-shaped space in my shed, so maybe time to think about filling it with something else, perhaps?