A short while ago, I and a couple of others made the trip down to Lincolnshire for the East EuropeanMotorcycle Rally. On the Saturday afternoon we took a short trip out to the Boston Bubblecar Museum for a look around.

This is a small friendly museum on two floors with a café and gift shop attached, staffed by volunteers who, we were informed, also made the cakes and scones which we sampled after our wander around.

As well as a host of micro-cars, small capacity scooters, and motorcycles they also have loads of motoring memorabilia and the glass cases mounted on the walls hold collections of old toys, cameras, board games and the like.

There were even a couple of closet sized rooms laid out as a living-room and a kitchen from the period between the wars. 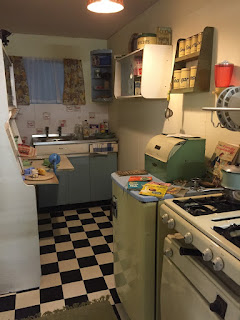 The kitchen looked scarily like the one in the first house I bought, even to some of the antiquated furnishings.

While most of the exhibits are lined up as you would expect, a number of them had been included in period tableaus, which was a nice touch.

There was also an area which held vehicles yet to be restored, some of which were in a sorry state indeed.

Overall, it was a pleasant way to spend an hour or so and, if you're ever in the vicinity, I'd heartily recommend you make the effort to pay it a visit.