A cautionary tale of motorcycle insurance and the reasons why it remains so high. 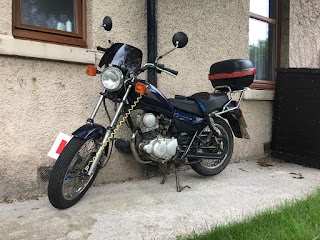 Earlier in the year my brother-in-law had a minor off on his little Yamaha SR125, the one that I rehabilitated and got roadworthy for him a couple of years ago [Here]. Nothing too serious, as he came around a roundabout in the rain he hit a patch of spilt diesel and the bike went down and he and it slid to the side of the road.

He had the bike recovered to his mother’s house and I went over the following weekend to take a look at it.

As expected, the damage was mostly superficial - levers, mirrors, indicators and the like. I made a list of the bits and pieces I’d need to get the bike back on the road and priced everything up on eBay. Some of the parts would be used and some would be brand new. All found, it would have cost a little over a hundred pounds for parts, and I reckoned that I could have it running with an afternoon’s work.

I phoned him with the news and asked if he wanted me to go ahead and order up the parts? He said that since he’d notified the insurance company to get it recovered they wanted to send out an inspector to have a look at the bike before taking any further action, and could I hold on a couple of days? He said he’d call me back once the inspector had been.

Fast forward a week and he called me back. The inspector had been, and the insurance company having seen his report are of the view that the bike is beyond economic repair. They were prepared to write it off and make him an offer in final settlement. He was tempted to take it. 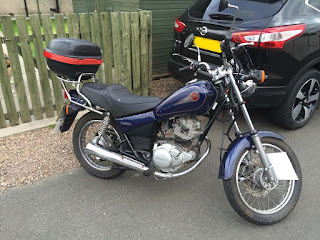 How much, I asked? They had offered Fourteen hundred, should he take it? Yes, I said, take it and run. Even at my most optimistic, considering its age etc., I put the bike’s value at no more than Eight hundred, and that on a good day. What was being offered was on the generous side, nearly double what it would likely have fetched had he tried selling it.

I did say that he should ask if he could buy the bike back from the insurance company. Then he’d have the payout, the bike, and I could get it roadworthy in next to no time. Unfortunately, they refused.

I know that the insurers couldn’t authorise the bike be repaired with mostly second-hand parts off eBay, and that it would be worked on by a qualified Yamaha mechanic who wouldn’t be offering to work for free as I was. However, I still find it hard to believe that, even with all new parts and paying the mechanic his standard hourly rate, that it would cost more than the Fourteen hundred the insurance company were offering to make everything go away. 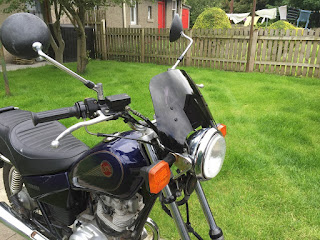 I suppose that in the grand scheme of things the sums of money in this instance are considered quite small, but it all adds up, and every year you see the cost of insurance increase because of pay outs like this.