I’ve been a bit quiet of late, mostly work related, but I did recently succumb and buy myself a new bike. Well, new to me. It’s a 2015 Triumph ‘Speedmaster’, a fuel-injected 856cc twin based on Triumph’s ever-popular Bonneville platform. 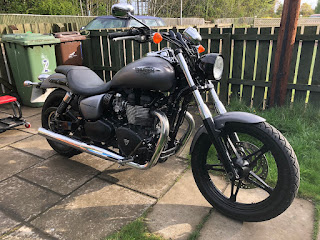 I’d been toying with the idea of a cruiser-style bike since I had the test ride of the Indian Scout last year. The Triumph is probably comparable, even with the smaller engine, and I’d been keeping an eye on likely prospects for a while.

This one turned up at a dealers not that far away and at a decent price. As I was at a loose end I drove down one weekend ‘to have a look’. I liked what I saw and, in the end, left a deposit, returning to collect it the following week. 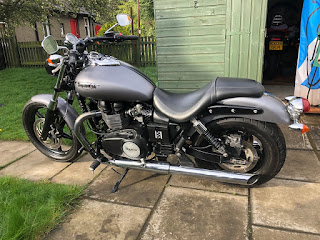 The feet-forward riding position takes a little getting used to, as does the fact that you throw a leg over it and *then* sit down. A radical change from the big adventure bikes I’ve been riding in recent years, where you almost climb up into the saddle.

I did find the initial ride a little hard, until I checked the tyre pressures and found that they were both about 10 psi over inflated. Only idea I can come up with was that the dealer did it so that they didn’t go soft on the shop floor and forgot to do anything about it while doing the pre-sale checks and service. Anyway, easily sorted out. 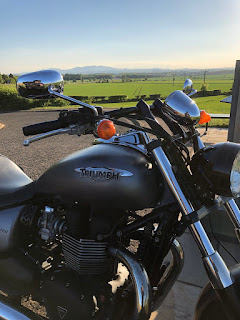 Early days, but I’m enjoying it.