I put my Triumph into the shop recently for its first major service and they kindly loaned me another bike for the duration, an almost brand-new Triumph Bonneville Street Twin 900, one of Triumph's ever-popular parallel twins. 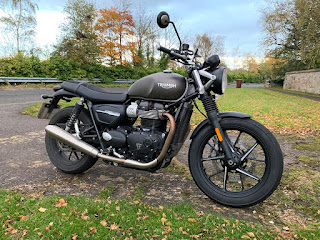 I must say that it was quite a bit different to what I've been riding lately. 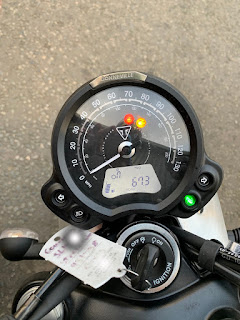 First reaction is that it's a small bike. Unfaired, no luggage, very light and with its short wheel-base relatively easy to move around, at least compared to some of the lumps I've had over the last couple of years. 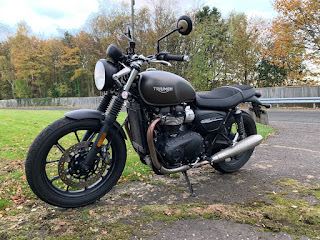 Sitting on it, the pegs are set well back, so you lean forward onto your wrists like a race bike and while the riding position felt a bit cramped at first I soon got used to it.

The gearbox produced a very Triumph-like 'clunk' into first and away we went. Acceleration, brakes, handling, all excellent, and the slightly non-standard pipes give a lovely burble as you trundle along. 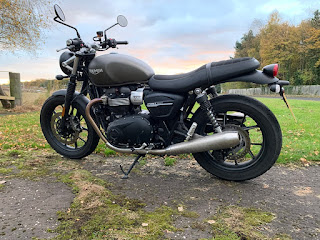 As with most naked bikes it would benefit from some sort of screen at higher speeds, and you'd need to fork out for some sort of luggage were you to plan going anywhere on it, but that's not really what this bike is all about. 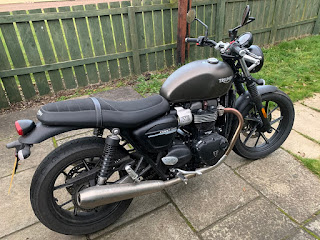 It's a shame that it rained most of the time that I had it as I didn’t really get a chance to put it through its paces, riding it with my sensible hat on to avoid any unpleasantness on an unfamiliar machine and greasy road surfaces. 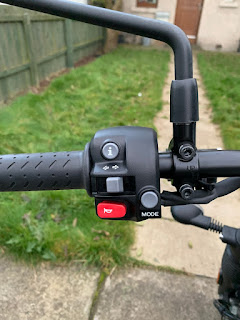 The only downside worth mentioning was that I found the switchgear a bit fiddly and difficult to use with gloves on. Using the indicators was a bit hit or miss as the buttons were quite small. You would maybe get used to it on longer acquaintance.

Could I be persuaded to trade it for my current ride? Probably not, which is no slight on the bike itself. It's an excellent piece of kit, but just not the sort of machine I'm looking for at the moment.

I took the Street Twin back and picked up my own bike after a service which cost a little under what I paid for my first three bikes combined! Nonetheless, everything feels just a little better, a little sharper than before, so I guess that it was money well spent.