Nostalgia Ain't What It Used To Be

This must be how older guys feel about British bikes they grew up with. 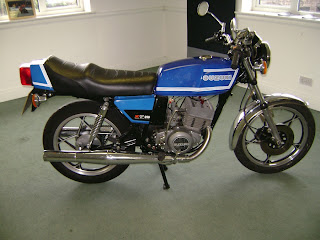 Many years ago I used to own a beat up old Suzuki GT250 X7. It had passed through the hands of many of my friends, and had been crashed a good few times. By the time I got my hands on it it lacked mirrors and indicators, had  a jury-rigged electrical system operated by some toggle switches under the seat, expansion chambers and K & N filters instead of an airbox, and was painted a rather lurid green colour. Unfortunately I don’t have any photos of it.

But, boy did it shift. However, after yet another crash it was eventually given to another friend for nothing as I didn’t have the space to store it. 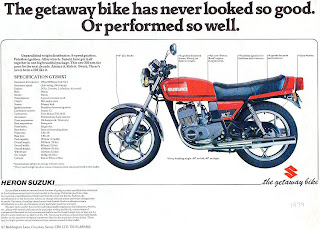 I recently briefly toyed with the idea of getting another one, but it has become a bit of a cult classic with reasonable ones selling for between 1500 and 2000. This is more than I want to part with for the sake of nostalgia.

There is even a decent owners club for them.
Posted by mr.combo at 22:05