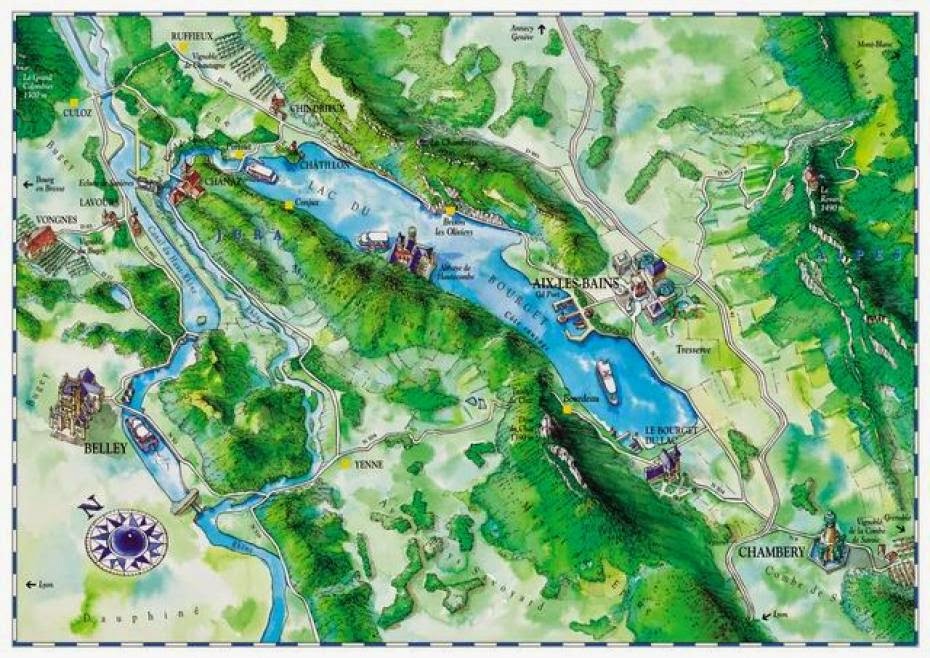 On our first proper day in Chambery on our trip to France last year we were debating about what we were going to do over breakfast at a small café in the town centre. The owner, who’s BMW was parked outside, got talking to us about bikes etc. and recommended a couple of routes we could try while we were there. ‘Other Terry’ (there were two of them on this trip) and I decided that riding the route around Lac du Bourget, the largest natural lake in France, looked quite interesting. So, that’s what we did.

Heading out from the centre of Chambery the road takes you around the western side of the lake before rising upwards in a series of tight hairpins with the lake visible through the trees as you climb ever higher.

Near the top we stopped beside a small café overlooking a viewpoint for some photos and to take on some much needed water as it was beginning to get rather warm again.

Whilst we were stopped, Norman appeared, said hello and warned us that a large camper van was heading in our direction, before shooting off to try and keep ahead of it. The camper van duly appeared and waddled past us. With visions of being stuck behind this behemoth for miles we were pleasantly surprised to see it heading back towards us a few minutes later.

We soon found out why. It looked like the driver had taken one look at the road back down and decided it wasn't for him. This road became single-track, with loads of of even tighter hairpins, and all through a heavily forested area. I wouldn’t have been keen to drive his camper van down it either.

However, no such problems for me on the Triumph Tiger. This type of machine is ideally suited for roads like this, and I was throwing it about through the bends and having myself loads of fun. Other Terry, on the other hand, was finding it much harder work on his Kawasaki ZZR1400. The sportier riding position, with all his weight leant forward, and the bike's longer wheelbase meant that he had to negotiate the twists and turns with a lot more care and attention than I was doing.

All too soon it was over and we were back on level ground, much to Other Terry’s relief, I think. Soon after, we caught up with Norman again at a crossroads as he was working out his route for the remainder of the day. He was thinking on taking in another section of high passes and as our intended route would take us in the opposite direction we said our farewells and went our separate ways. 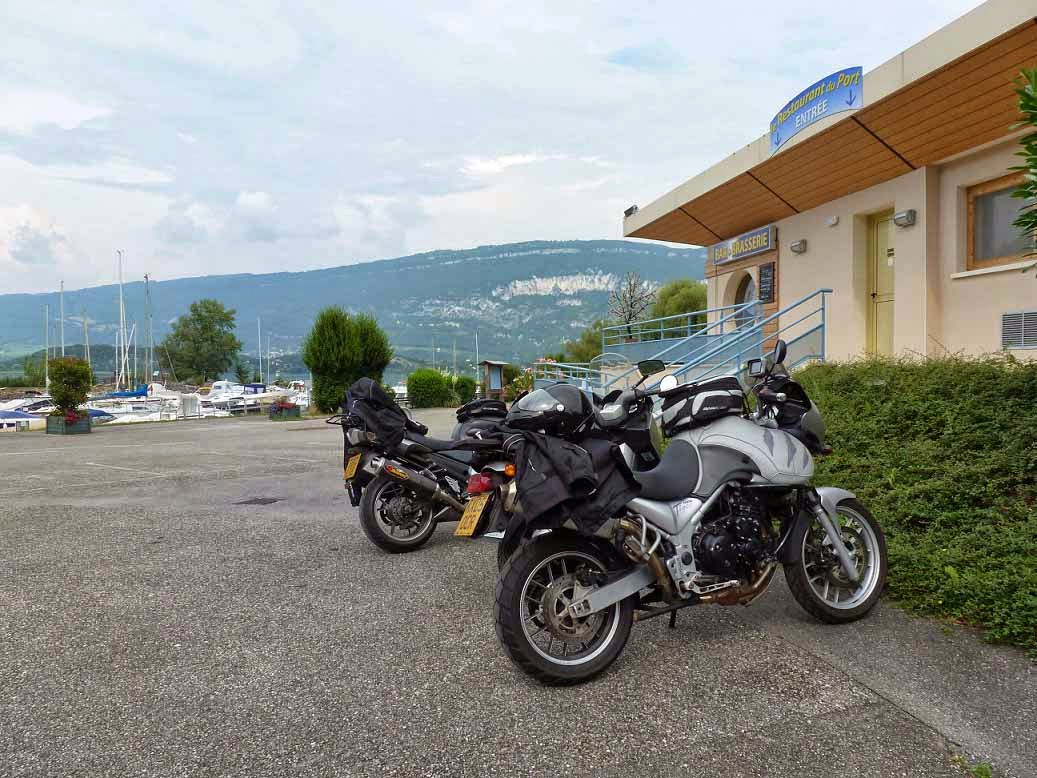 After a bit we pulled into a café located next to a small marina right on the lakeside for a bit of a rest. The temperature was still in the low 30s and the heat was taking its toll on us, even when riding along the air had a distinctly warm feel to it. The opportunity of a seat in the shade and a cold drink was more than welcome.

We stopped for about half an hour before heading off again along the eastern side of the lake this time. Not long after setting off, however, we got caught up in some almost stationary traffic and after creeping along for a few miles slipping the clutch and generally getting hot and bothered we took the opportunity to pull over onto a beach area for a bit of a breather.

The traffic didn't look like clearing any time soon and, as we were deciding what to do a couple of ambulances whizzed past. It looked like there might have an accident up ahead. That decided it and we sat down to wait it out a bit. Eventually the traffic thinned out and we headed back. It had been an interesting day, and it wasn’t over just yet.
Back at the hotel we had a shower and got changed before heading out for something to eat with the rest of the lads. After pizza at a small cafe where the owner insisted we all try what I think was probably his own home-made schnapps we came across some sort of music festival in the town square.

We got ourselves a table in the square and took in the headline act, an Irish folk band called The Wooden Legs (it maybe makes more sense in French) who were actually French and who sang in a mix of French and heavily-accented English. They were quite good, and went down a storm with the locals, some of whom felt the need to get up and dance. We, being more reticent, satisfied ourselves by sitting and nodding our heads a bit in time to the music. A curious, and rather relaxed way to end our day.

What about the really cheap beer, then? Well, when Stuart I went to get a round of drinks in from one of the bars around the square the barman apparently didn't have change of the 20 Euro note I proffered, so asked his boss what he was to do. The boss rather dramatically threw his hands in the air and started gabbling away in staccato French before leaning over the counter and grabbing a 5 Euro note out of Stuart's hand and giving it to the barman who shrugged and gave us our five bottles of beer and my 20 Euros back. We made a sharp exit as this seemed too good to be true. It was. When the others went back the next round came to nearly 15 Euros. I guess that they had sorted the problem with having no change by that point. So, my round was the cheapest of the trip and had the added bonus that Stuart actually paid for it.