This is from a club newsletter that I was sent. It’s something that bears thinking about:

“Close friends of ours have been devastated by the loss of one of their sons in a slow speed, seemingly inexplicable accident. Something went wrong at just around forty mph and suddenly he was down, on a perfectly straight road in perfect conditions on a nearly new motorcycle. The driver in the following car went over to help him as he was lying on his back. The car driver thought that the rider was just stunned or winded as he seemed to go down fairly gently. Unfortunately there was nothing anyone could do. The rider was wearing a lightweight rucksack on his back, the same way as we all see dozens of riders do, but this was apparently enough to hold his back high enough off the ground to transfer the forces of the tumble into his cervical vertebrae breaking his neck and causing instant death. His family are haunted by the thought that a couple of minutes securing the rucksack onto the bike with bungees would probably have saved the lads life, but he was 'only nipping down to visit a friend'. 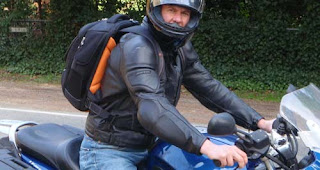 I shudder every time I see a rider wearing a rucksack. I saw three scooter riders in a short space of time this morning with quite big rucksacks on their backs, which reminded me all over again of our friends’ distress.
Please think before you go out, and if you get half a chance make young or novice riders aware that despite their user friendly image a small scooter has the potential cause as much grief as the most powerful superbike in the wrong circumstances.” 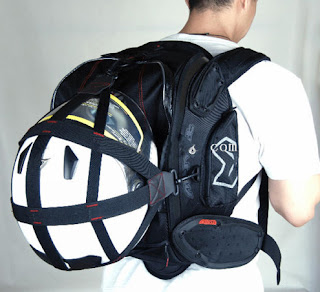 I often see riders of sports bikes with rucksacks on. I suppose that it’s because today’s models have little or no thought given to the carrying of luggage, image being everything. I heard a similar tale a few years ago. There was a fatal accident near Edinburgh where a young lad had come off his bike breaking his neck. He was on his way back from the Scottish Bike Show where he had just bought himself a new helmet. He wore the new one home and clipped his old one onto his backpack. When he came off his bike the helmet/backpack combination was the main contributing factor in his injury.

I've heard similar tales about people who carry tools loose in their pockets. Imagine, if you will, coming off and landing on a set of spanners or a screwdriver or, heaven forbid, that large bike chain you've looped around your shoulders. It may look mean & rugged, but imagine sliding down the road with it wrapped around your body.

If you don’t have/want a top-box it’s a good idea to invest in some luggage elastics, or one of those nets. A minute or two invested in attaching your luggage to your bike, instead of carrying it on your person, may be enough to allow you to escape major injury or worse.