I recently decided to replace the original coil and mechanical regulator on my MZ ETZ251. So, to that end I acquired a coil, designed for use in an old style Mini, and HT lead for it from Halfords, along with a Lucas electronic voltage regulator (part no. NCB 403), as fitted to various cars and bikes like BMWs and Moto Guzzis. 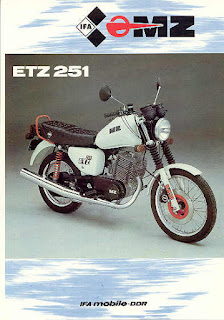 One Saturday morning with the parts in hand, a copy of Hints & Tips Vol.2 for reference, a couple of bottles of beer and a new CD that I’d just bought for inspiration I made for the shed. I had nothing else planned and was determined to get everything done in one go.

The instructions for fitting a replacement regulator in H&T2 are pretty straightforward. In fact, there are three or four different lots from which to choose, but for those of you who don’t have a copy (and why not?) I’ll repeat them here with my own observations thrown in for good measure: 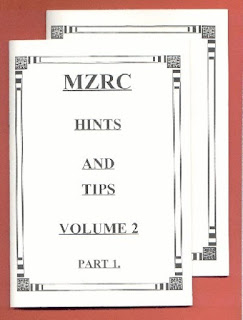 With the seat off the first thing that you should do is disconnect the battery. This is in case you accidentally short-circuit anything. Pull the wires (5 terminals) off the regulator (don’t forget the earth wire, bottom left as you face the front of the bike). Remove the old regulator by pushing the rubber spigot (bottom right) through the clip on the frame with a screwdriver (be careful with this as we’ll need the clip later). 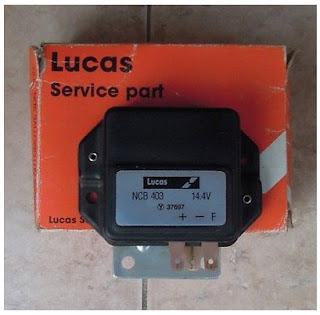 Make a small bracket to attach the new regulator to the bike. Connect the brown, green/blue and green/red wires to the new regulator. Bolt the regulator and bracket in place. I fitted the regulator with its rear against the petrol tank and the terminals facing backwards. That way there’s no need to fiddle with the various wires for length. Next fit an inline fuse holder with a 15A fuse between the red/yellow and red wires (the thick ones). On the original regulator the connection between the red/yellow and red wires (terminals D+ and 51) is a current limiter which cuts out if the current goes above 15A. This would only normally happen if a short circuit occurred. The 15A fuse in the inline holder would blow if this were to happen now. However, from talking to others recently it seems that the fitting of the inline fuse is a bit of overkill and is strictly speaking unnecessary. However, I fitted one as a precaution and because I had one to hand.

The longest job I found was making up the bracket to attach the regulator to the bike. I cut a small square metal plate to the size of the regulator and drilled a couple of holes in it to line up with the ones on the regulator. A small bolt through the hole on the left of the regulator, a longer one through the one on the right when viewed fitted as described before. I then bent the clip that the original regulator was mounted to so that the longer bolt could run through it and tightened up the bolt with a couple of large washers. This holds the regulator in place and the shape and size of the square plate prevent it from moving around. 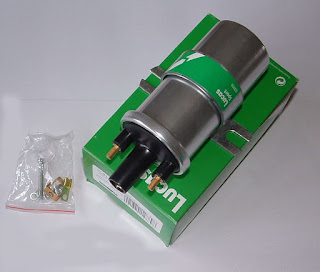 Next up was the coil. Remove the original coil by loosening the bolts which mount the bracket around the coil to the bikes frame. The new coil, designed for a car, is quite a bit larger than the original MZ one and, no surprises, it won’t fit the original bracket so you’ll have to make up another one. Luckily the coil I had came with a metal bracket which I re-shaped (hit with a big rubber mallet until it was the right shape) before attaching it to one of the original mounting points on the bikes frame. There are also a couple of additional spade connectors attached to the terminals on the car coil. These can be safely removed as they won’t be needed. Connect the wires to the terminals.

Be careful when mounting the new coil as it’s a bit of a tight fit under the seat. Make sure that the terminals don’t touch anything metal or you’ll start blowing fuses. If this happens when you’re riding along the bike will simply cut out on you and you’ll lose power and all your lights. This is what happened to me when I originally mounted the coil using cable ties instead of a proper bracket. Not too clever at night on the motorway, I can tell you. Copious amounts of insulating tape would be a good idea too at this point, or you could use some old inner tube as a make-shift rubber boot to protect the terminals..

Right, that should be the coil attached to the bike. Connect one end of the lovely new orange HT lead to the coil, cut the metal clip off the other end and screw on a standard (NGK) plug cap. You can’t re-use your old HT lead because it needs one of the clips which are attached to the new lead to connect to the coil properly. The one on the other end is surplus to requirements so it can go to make way for the plug cap.

Reconnect the battery, and you’re in business. However, before I finished up I dressed and adjusted the points as well since doing all that work and having it all come to naught because you couldn’t be bothered to take five minutes to check the points seems a bit of a waste. If you’ve got electronic ignition then this bit isn’t necessary, obviously. Everything was then treated to some silicone sealant to keep out the weather.

Time taken? About 3 hours from start to finish, but that included taking off all the bodywork, the seat and the rack, doing the work including making all the brackets from scratch, before putting it all back together and running the bike up and down the road to make sure everything was working properly. I’m sure that if I’d been better organised it could have been done in half of that time, but I wasn’t it any particular hurry and it was better to get it done right than get it done fast.

How does it all work now? Well, it’s not that much different except that the spark is a lot fatter (which is good), acceleration is a bit crisper and it idles better. Nothing too dramatic. Only time will tell with regards reliability, although I believe that using a high output car coil in this way means that the points wear out faster. However, I can live with this. It just means checking them a bit more regularly in the future.

Note: when messing around with non-standard bits you do so entirely at your own risk. If you follow these instructions and your bike explodes, don't blame me.

(Originally posted in Thistledown: Journal of the South of Scotland Section MZRC, Apr. 2005)