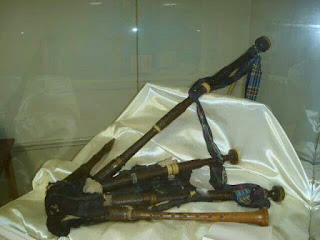 Yesterday in 1746 James Reid was hanged, drawn, and quartered at York. He had served as a piper in the 1st Battalion, Lord Ogilvy’s (Forfarshire) Regiment, raised in October 1745 in support of the Young Pretender, Prince Charles Edward Stewart.


He was among several men from this regiment left as part of the garrison of the English border city of Carlisle when the Jacobites abandoned their invasion of England, and was captured when the city surrendered to government forces in December 1745.

At his treason trial  it was put forward in his defence that, as a musician, he did not carry arms and had not struck a blow against the Government.

However the court ruled that “...a Highland regiment never marched without a piper, and therefore his bagpipe, in the eyes of the law, was an instrument of war”.