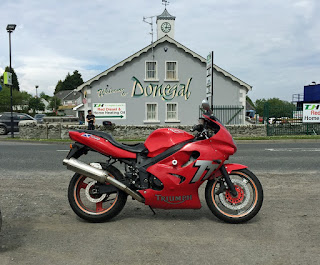 Well, I'm just back from my trip to Ireland on the TT600. The rain stayed off, the sun put in the occasional appearance, and the journey was made without major mishap. I met up with friends old and new and a few beers were quaffed. All told a pleasant way to spend a weekend away. I'll post something later about the event itself.

There were, as expected, a couple of hiccups as regards the bike on what constituted its shakedown run, but nothing that can't, hopefully, be sorted.

The first problem manifested itself almost as soon as I hit the motorway. I had put the heated grips on as the morning had started out chilly and it seems that the glue holding them on softened allowing the grips to rotate on the bars. This was a bit unnerving until I worked out what was happening and it made throttle response a bit hit or miss with the grip sliding about. 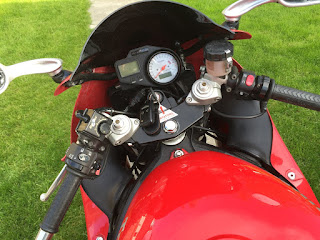 So, first decision made. The heated grips are coming off. I never really liked them anyway, so no great loss. Luckily they are not wired into the loom, but are connected directly to the battery so removal will be fairly pain free. I'll hang on to them should I decide to sell the bike later.

As expected, the Datatool alarm was a pain in the posterior. Either beeping away incessantly or failing to disarm when required. I fully expected it to get on my nerves, and so it proved. If I keep the bike then it will definitely be coming off. This might prove to be a bit more difficult than the grips, but needs must.

Finally, my main reason for taking the TT600 was to see if I could live with a sports bike on a longer trip. The short answer is that, no I can't. The riding position is quite cramped for someone of my advanced age and *ahem* manly physique. After about an hour or so I began to feel it through the hips and the knees. Also, the lack of anything resembling luggage-carrying capacity meant I was reduced to strapping a dry-sack with a few bits and pieces in it to the passenger seat, having removed the kid on seat hump first.

So, will I keep the bike now that I've worked out that it really doesn't really suit? Probably not, but as I'm in no great hurry and, unless someone makes me a reasonable offer for it, I'll wait until later on in the year before making a final decision on that.

I have half-formed idea that I might like a brand-new machine for next summer and the choices out there are many and varied.