Taking my own advice in an earlier post, I spent some time yesterday working on the front brakes on my Triumph Tiger. The bike itself has been off the road for a couple of years and I was hoping to resurrect it and either use it over the summer or sell it on, I haven't quite made up my mind which. 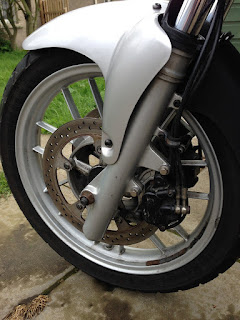 While working on it a while back I had overhauled the back brake, fitting new pads and changing the fluid, but found to my dismay that one piston in each of the front calipers was jammed tight and wouldn't budge, the tops I could see were heavily pitted and scored.  I decided to put them to one side for another day. Yesterday was that day.
Armed with some new stainless replacement pistons I had ordered while I was waiting, it was time to brave the cold in the shed. 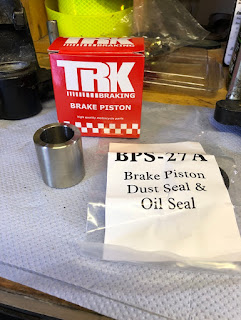 It took a lot of work to get the original pistons out as they were seriously chewed-up and appear to have last been removed by a gorilla using molegrips. As I intended replacing them I didn't feel the need to be particularly gentle with them myself, which was good as they weren't keen on coming out and a fair degree of brute force was required, but come out they did in the end. 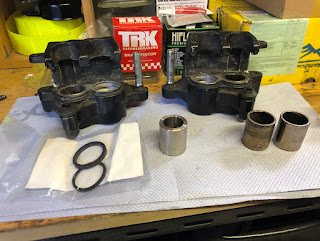 Once out, I carefully inspected both calipers as I was a little concerned that the piston seats might have also been damaged but, apart from some superficial scoring to the upper surfaces they appeared sound and some wet & dry sandpaper took care of the problem. 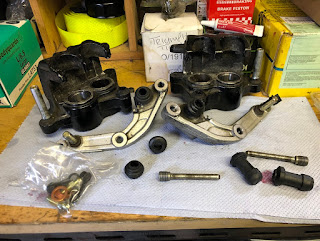 Removing the original seals it was obvious that the amount of corrosion behind them had also been a factor in gripping the pistons preventing their removal. So, first order of business was to carefully scrape the corrosion away. Then a thorough clean in degreasant for both calipers to get rid of any traces of brake fluid or dirt, and it was time to put everything back together. 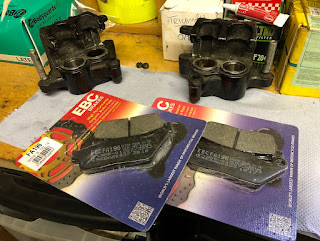 The new pistons came complete with rubber seals and a little packet of silicon grease, so the seals were greased up and fitted into their channels and the new pistons slotted home. While I was at it, I replaced the bleed nipples with some new ones, also in stainless. 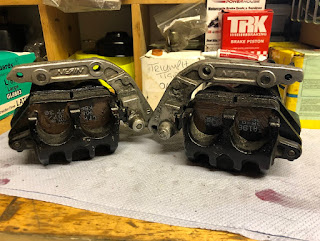 Then, calipers reassembled, smear some copper grease on the backs of the brake pads to stop them squealing, and then into the calipers, a quick wipe with a cloth and that was that for the day. I'll fit them back onto the bike another time when it isn't so cold.
Posted by mr.combo at 20:41