I have always found conventional methods of mounting a Sat-Nav to my bike rather unsatisfactory. Nothing to do with the equipment used, more that, once mounted, usually somewhere on the handlebars, the unit's screen is normally out of your immediate eye-line and you have to look away from the road to see it. Not a major problem, I admit, but a nuisance all the same.

However, when I bought my Tiger it came with what looked like an alloy bar across the back of the screen where it met the top of the fairing  (see pictures). I had assumed that it was some piece of expensive Touratech kit, but when I commented on it I was told that it was actually homemade. 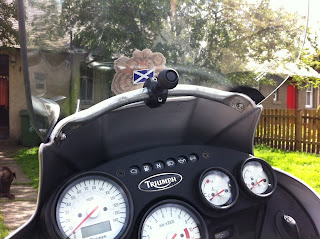 The previous owner, like me, hadn't been too happy with mounting his Sat-Nav on the handlebar so he took an old aluminium tent-pole, cut a piece to size, then gently bent a curve in it to match the curve of the screen/fairing. He flattened a piece at both ends, drilled a couple of holes, and fitted it using slightly longer screen screws. All relatively straightforward. 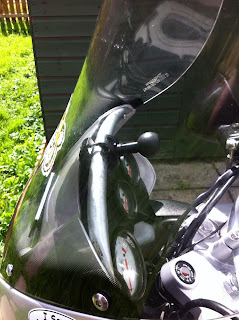 When you fit your Sat-Nav to this bar with a clamp it is now directly in your line of sight and you needn't take your eyes off the road for longer than you need to. On my recent trip to Belgium/France I did this and found it a massive improvement over what I had been doing before. 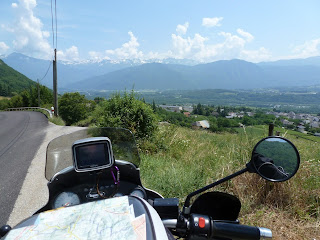 I should also mention that I have in the past seen Sat-Nav clamps bolted through the screen, or through holes drilled in the fairing to achieve the same effect. The beauty of this modification is that it's discrete, you haven't done anything to damage your bike in the process, and it can be removed with no one any the wiser. I think that it is a rather elegant solution and may do something similar for my other bike(s).