Having stopped to take a couple of photos outside Torness Power Station on my ride on Saturday I was a bit bemused about half an hour later to be stopped on the road by two heavily armed officers of the Civil Nuclear Constabulary (no, I'd never heard of them either) and asked, politely, to show them the photos. 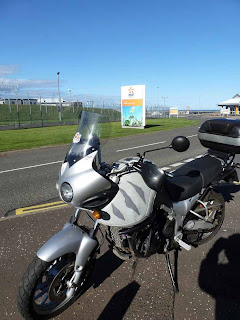 Apparently, my taking photos of my bike on the public road in front of the power station had set off alarm bells and the two officers were despatched to question me in case I was up to no good. Apparently Big Brother was indeed watching me. 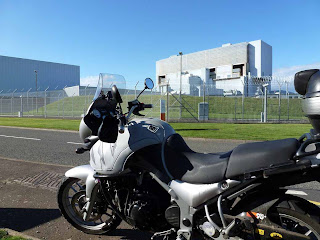 Handing over the camera I said that they could delete any that they didn't like, but they said that there wasn't anything on it that couldn't be picked up off of Google Earth and gave it back to me. We had a short chat, they apologised for the inconvenience and that was the end of that. 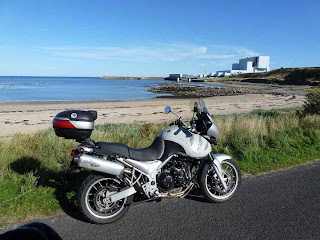 It was all quite amicable, and the two officers concerned were as nice as could be. It's just that I'm not used to encountering armed police. Regular police in the UK carry, at best, pepper spray, although there is an ongoing debate about whether they should also have access to tasers. These two, however, were armed to the teeth, with assault rifles and handguns in addition to tasers and pepper spray. Actually, I was surprised that they could both stand up they had so much equipment hanging off their belts and flak vests.

After all of that, I decided not to use any of the photos for the Landmarks Challenge, which was why I was taking them in the first place. Torness isn't really that interesting to look at from the outside and I decided to use something else instead.

Email ThisBlogThis!Share to TwitterShare to FacebookShare to Pinterest
Labels: British Motorcycles, Landmarks, Miscellaneous, My Motorcycles, Out & About, Police, Triumph Motorcycles