Out & About In Ireland

Another weekend, another weekend away. This time to Ireland for the Irish MZ Section's annual camping weekend at Ballacolla, Co. Laoise. This involved a very early start, a long haul to catch a surprisingly empty ferry to Larne in Northern Ireland, and then another long haul down the motorway to Dublin and points west. In all, it’s about 350 miles, not counting the ferry crossing.

There were, like me, a number on other makes of bikes, but the MZ boys are a fairly tolerant lot and you'll be made welcome no matter what bike you show up on.

This year there were more MZ Rotaxes (Rotaxii?) than I've seen in one place for quite some time.

As we are located quite a way out of town the organiser and area rep, Big Jim, had organised a local taxi firm to take us to and from the pub in a mini-bus.
For some reason known only to him the pub we’re taken to is rather run-down and seedy. The sort of place where you are advised to wipe your feet on the way out. It does, however, have the benefit of being mostly empty so that we can pretty much take the place over. 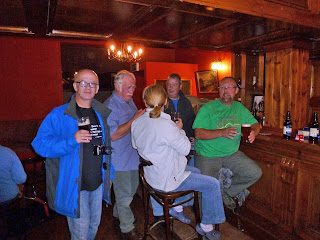 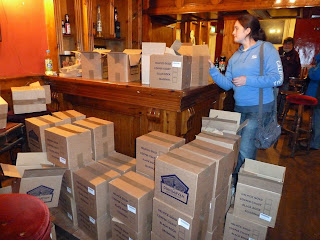 Anyway, this year, the landlord had decided to give us all a break from Guinness and had bought in cases of assorted ales from a local micro-brewery. As you can see from the picture he has a healthy respect for the quantities of beer which we can put away.

As in previous years, guitars were produced and songs were sung. The owner of the pub loves this bit and shushes anyone who dares talk during the songs. Then back for a nightcap and seemingly endless rounds of toast.

Sunday morning comes too soon, and its time to pack everything away and say your goodbayes. Same time next year, guys?