Many years ago BBC journalist, author, and keen motorcyclist Tom Morton made a trip around all the remaining whisky distilleries in Scotland. That journey spawned first a book, then a radio show, and then finally a television series. 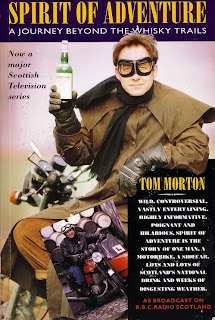 I first read the book years ago and was pleased to discover that Amazon had released an updated version on Kindle format. If you’re interested it can be found here. I thoroughly recommend it to you, especially so as it's retailing at just over a pound (Sterling).

The success of the book led to the TV show, of interest to those of us who rode bikes for the appearance of a ratty old MZ ETZ250 sidecar outfit on prime time television. Tom Morton even joined the MZ Riders Club on the back of his experiences, and later on was the owner of one of the first MZ Skorpions sold in the UK.

The TV show was, as far as I am aware, only shown in Scotland and has never been repeated (I do have a bootleg copy on DVD somewhere should anyone be interested).

As a postscript, the actual sidecar outfit passed through many hands and ended up being owned by a friend of mine who lived near Stirling.
Posted by mr.combo at 11:32