Over the years I've owned several MZ Skorpions, the bike with the big single engine from Yamaha. I started with a Traveller, then bought a Sport, and finally completed the set with a Tour, so you could say that I like them. I still have the Tour and the Sport, although the Tour is due a rebuild after being stolen/recovered, and the Sport currently resides at the back of the shed having fallen out of favour because of the effect that it's riding position had on my worsening back.

The Sport is a great fun bike for short rides, but most of my riding in recent years has been confined to long-distance touring, and it just doesn't fit the bill. It was picked up reasonably cheaply, and I have had more than my money's worth out of it, so it probably makes sense to sell it on to someone who will actually ride it. I did dig it out for a service along with my Tour prior to taking the latter on a European jaunt several years ago, before putting it away again as I was still in two minds about what to do with it.

Finally, last year I decided to sell it and began the task of resurrecting a bike that been off the road since 2007 if the expired tax disc was any indicator. However, before I’d done much more than take all the bodywork off and give it a bit of a clean I was interrupted by the need to get another ancient relic fit for the road, this time my wife's old 125 for her brother to take his test on (for details see Here). Time and events then conspired against me and it went back into the shed for the remainder of the year. 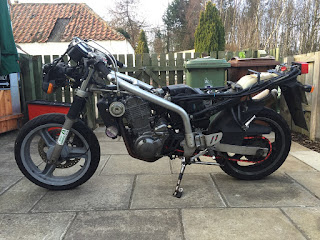 A couple of weeks ago, I decided to give it another try. I dug out all the bits I’d acquired and made a list of what needed done. It was a surprisingly short list, so I’m hopeful that I can get it ready for the Spring. Current thinking is that once done I'll sell it off and clear a bit of space in the shed for other projects but, you never know, I might like it again so much that I hang onto it for a while yet. I really hate selling bikes.