Shortly after I bought my first motorcycle as a teenager I rode over to visit a friend. Turned out that they weren’t in but expected back shortly, so their father invited me in and offered me a cup of tea while I waited.

Along with the tea he brought along an old metal biscuit tin which turned out to be full of black & white photographs of old motorcycles and motorcycle racing. He’d seen the helmet and thought I might be interested. Needless to say, I was. 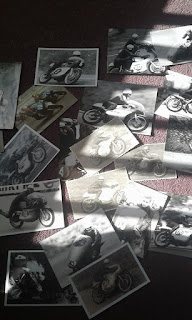 They were from meetings at race circuits and cafes all over the place, as well as the Isle of Man TT races, and a lot of them featured a much younger version of the elderly man standing in front of me, clad in a leather jacket and boots and sporting a rather natty rocker-style quiff. They were a veritable treasure trove of fifties biker culture and the British Motorcycle industry at the top of its game. 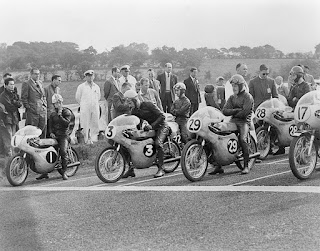 It turned out that his first job out of school had been to collect motorcycles for a local dealer in Aberdeen. In those days customers were expected to order a new bike, pay their money, and wait patiently on it being delivered to the dealers. As the north of Scotland wasn’t exactly a big market no one was going to deliver the odd bike all that way, so the shops were expected to make their own arrangements.

He used to get his mum to make him some sandwiches and a flask of tea and he’d catch the early train down to the factories in England and then ride the bike back home to Aberdeen. The bike should then be nicely run in and, after a quick service, it would be passed on to the lucky customer. 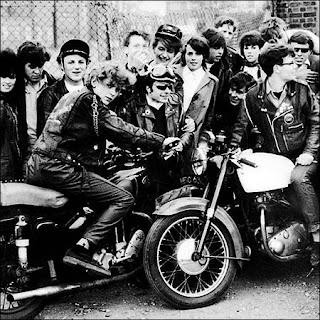 This sounds great if you are getting the chance to ride big powerful bikes like Norton Commandos, BSA Gold Stars and Triumph Bonnevilles, but less so when you consider that most of the bikes would be a lot more pedestrian. I’m not sure that I’d fancy riding a small capacity Bantam over 400 miles on minor roads at riding-in speeds in all weathers in the days before helmets and decent waterproofs. Still, I’d assume that it beat working in a factory or going down a coal mine, the other options open to a young man in his position.

Needless to say, marriage and fatherhood put paid to his riding days, but he got all misty-eyed telling me the story and seemed to remember the period with fondness, or maybe it was his youth he was remembering?

(Not the *actual* photos, but a flavour of what was in that old biscuit tin)