I needed a new battery for my MZ Skorpion and had heard good things about Motobatt maintenance-free ones, so I decided to give one a try.

They are not a standard lead acid battery, but use AMG (Absorbed Glass Matt) technology which they reckon can give up to 20% higher cranking power, useful for owners of big singles that don’t get started up that regularly. 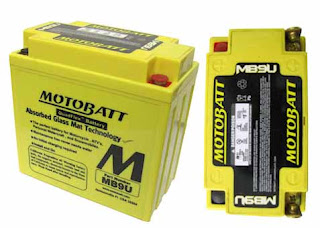 I bought online and the battery was delivered by courier a few days later. They are certainly distinctive, being a very bright yellow.

Is it any better? Well, as advertised I didn’t need to charge it up before fitting and the MB9U model I bought went straight into the existing space under the seat. A friend who bought a slightly larger one had to cut off the ‘tag’ used to locate the top of the rubber battery strap to fit his in. I’ve not had any problems in starting the bike and it performed perfectly on my recent Irish trip. 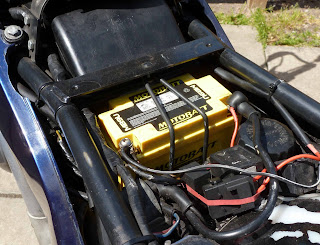 To be fair, the Yuasa battery it replaced had given perfectly good service for many years, but had started to need more frequent attention as I had let it completely drain over the last couple of winters as I don't have power in the shed.

I guess only time will tell if it will last any longer than the old one but in the meantime I'm quite happy with its performance to date.