Well, that's me got my Skorpion back quicker than I was anticipating. It had been located almost immediately as the thieves has tried to set it on fire, presumably as they couldn't get it started despite chiselling the ignition off to get at the wires. I took delivery of the remains yesterday afternoon.

Initially, I had been told that it had been burnt out and obviously assumed the worst. However, when I went to have a look I found that only the tank had been damaged (see picture below).

How you can set a plastic fuel tank full of petrol on fire and fail to completely destroy a bike I find hard to understand. I'm not complaining, you understand, just curious. Anyway, having worked out that most of the additional damaged or missing bits could be replaced from the depths of my spares bins I set about arranging to have it returned to me.

The insurance company were talking about writing it off as uneconomical to repair and wouldn't guarantee that I would be able to buy it back as salvage. So, first thing I had to do was drop my insurance claim. That way the bike was still legally mine.

Next up was the legal con that the authorities play on you. The Police no longer recover stolen or abandoned vehicles, that has been farmed out to private companies, and these companies want paying. So, in order to get my own property back I had to pay the recovery company concerned 200 quid for recovery and 'storage', ie. sitting in their yard. None of this money can be reclaimed, so you might say that I'm not best pleased. However, all things considered, it could have been a lot worse.

The plan now is to put the bike back to Traveller spec. using all the bits I took off a couple of years ago (see picture below), that way I don't have to spend any more money than absolutely necessary. 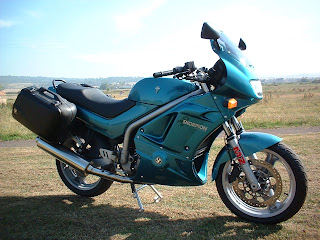 I will need some new clocks, a new ignition barrel and to have some welding done on the rack which has a broken seam, but once I get these things sorted I reckon that I can have the bike back on the road over a long weekend should everything go to plan.

So, if you're interested you can just look at my earlier posts on the process in the reverse order.