SUBJECT: Tools for a motorcycle enthusiast:
I’ve found variations on this all over the ‘net. So, here’s one version for those of you who haven’t encountered it before. 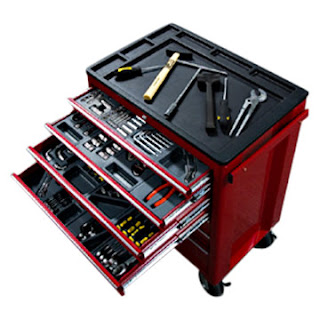 HAMMER: Originally employed as a weapon of war, and often found alongside the sickle in the club banners of countries who had firm ideas on government, the hammer is now used as a kind of divining rod to locate expensive parts right beside the object you are trying to hit.
STANLEY KNIFE: Used to open and slice through the contents of the cardboard carton delivered, at great expense, to your workshop; works particularly well on boxes containing fairing panels and a lone bottle of battery acid.
ELECTRIC DRILL: Normally used for spinning steel pop rivets in their holes until the Stupidity Police come to take you away; it also works great for drilling mounting holes in after-market mudguards and through the new rear tyre you’ve just fitted.
PLIERS: Used to round off bolt heads and crush irreplaceable wiring loom connectors.
HACKSAW: One of a family of cutting tools built on the Ouija board principle. It transforms human energy into a crooked, unpredictable motion, and the more you attempt to influence its course the more erratic your destiny.
VICE-GRIPS: Used to round off bolt heads. If nothing else is available, they can also be used to assist in arc-welding your metal watch band to the rear sub-frame.
OXY TORCH: Used almost entirely for finding various flammable objects in your garage. Also handy for firing off the two remaining explosive atoms left in that holed fuel tank you've been soaking in water for six months.
WHITWORTH SOCKETS: Once used for working on older British motorcycles, they are now used mainly for impersonating that metric socket you've been searching for over the last two hours. The socket you actually wanted will appear the moment you've rounded off the bolt.
DRILL PRESS: A tall upright machine useful for suddenly snatching that flat metal bar out of the bloody mess that was your hand so that it smacks you in the chest and flings your beer across the room, splattering it against that freshly painted part you were drying.
WIRE BENCH WHEEL: Cleans rust off old bolts and then throws them through the workbench with the speed of light. Also removes fingerprint whorls and hard-earned guitar calluses in about the time it takes you to say, "Aaarrgh...!"
HYDRAULIC JACK: Used for lowering a motorcycle to the ground after you have installed your new front disk pads, trapping the jack handle firmly between the (now) dented alloy rim and the (now) cracked mudguard.
2X4 TIMBER: Used for trying to lever a motorcycle off a hydraulic jack.
GASKET SCRAPER: Useful as a breakfast tool for spreading Marmite on toast; and for getting dog refuse off your boot. Does not require washing.
BOLT AND STUD EXTRACTOR: A tool that snaps off in bolt holes and is ten times harder than any known drill bit. Always two sizes larger than the label says.
TIMING LIGHT: A stroboscopic instrument for illuminating burred screws and the futility of ever getting the timing anywhere near factory specs. Useful for sticking in your mouth late at night and permanently traumatising any small child that mistakenly wanders into the workshop.
ENGINE HOIST: A handy tool for testing the tensile strength of the battery straps and oil lines you have forgotten to disconnect.
BATTERY ELECTROLYTE TESTER: A tool for transferring sulphuric acid from your bike’s battery to the inside of your toolbox, and down the inner thigh of your new jeans, after determining that your battery is dead, just as you thought.
METAL SNIPS: See hacksaw.
PHILLIPS SCREWDRIVER: Normally used to stab through the foil seal of brake fluid containers and splash the contents liberally across your freshly-painted fuel tank; can also be used, as the name implies, to round off Phillips screw heads.
AIR COMPRESSOR: A machine that takes energy produced in a coal-burning power plant 200km away and transforms it into compressed air that travels by hose to an impact wrench that grips rusty bolts last tightened 60 years ago, by an apprentice fitter, and rounds them off.
PRY BAR: A tool used to crumple the £100 metal surround for that clip or bracket you needed to remove in order to replace a penny washer.
HOSE CUTTER: A tool used to cut hoses a centimetre too short.
Posted by mr.combo at 22:35