Today was truly awful. Probably one of the worst days that either of us could remember having had on a bike. It was raining when we exited the ferry at Copenhagen, and it was still raining when we arrived in Bremen seven hours later. Add to the rain, really strong gusting side winds, almost constant roadworks and another dose of German drivers and you have a recipe for a very long and tiring day.

The run across Denmark was wet and unpleasant, and the crossing on the small ferry from Denmark to Germany was rough due to the high winds which tossed the boat about a fair bit. However, once off the ferry the road crosses a rather large suspension bridge. The wind straight off the sea was horrendous, blowing us all over the road. We passed a number of cyclists huddling behind the pillars on the footpath over the bridge who were, it seemed, trying to hide. No such hiding for us, though. Traffic crawled along, with the big trucks tail-gaiting slower vehicles, including those of us on bikes. What would have happened had one of us fallen off didn’t bear thinking about.

The journey through Germany on the way out had been fairly uneventful, but this return trip was sheer torture. The standard of driving hadn’t improved in the week we had been away and now, rather than being faintly amusing, was actually something which was approaching dangerous. Not helped by our being wet, cold and fatigued from wrestling with the bike in the wind and our reaction times not being what they should have been.

Crawling along because of roadworks was hard going. At one point we gave up being nice and just filtered through about 10 km (6 miles) of stationary traffic, to discover that the reason for the hold-up was the closure of one lane on a short bridge. Once over the bridge the traffic went back about its usual suicidal business.

Not much else to say, I’m, afraid. Glad that the day was over we rolled up to our hotel on the outskirts of Bremen. 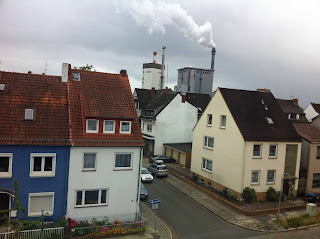 Booked over the internet, this one didn’t quite match expectations (here's the lovely view from our window), but it got us out of the rain, and after something to eat and a very welcome beer to steady our frayed nerves we headed for another early night, not relishing the fact that we had to do it all again on the morrow.

Only later did we find out about the terrible events which took place in Oslo today, which did put our own experiences into some sort of perspective.