Last day, and another long one. We were up and away from the hotel early. In fact, there had been a bit of a communication breakdown the night before about times and we had to wake the proprietors up to get our bikes out of the garage, so no breakfast for us today.

Also, no real rain today, thank goodness, only the occasional light shower, but the winds from yesterday were still making themselves felt. They make travelling at motorway speeds very tiring as you seem to be fighting the bike all day. However, as soon as we passed over the border into the Netherlands the standard of driving improved considerably, making the final run to the ferry less harrowing than yesterday had been. 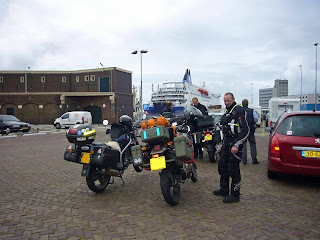 We eventually arrived in Ijmuiden in plenty of time, and began to relax in the knowledge that it was all almost over. One more night and then we'd be back in the UK. To celebrate we had some fish & chips before heading off to book in at the ferry terminal.

Once through and onto the quayside we were left to wait for over an hour in increasingly stormy conditions, but Gareth and I were in high spirits as we were on our way home. I did feel sorry for some of the others who were obviously starting their trip in such poor conditions. 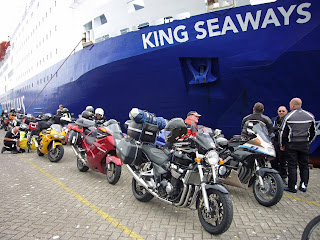 There were loads of bikes, too. Gareth was pleased to note that his was still the smallest bike there. The only ones smaller than the Skorpion, apart from Gareth's bike, were a couple of 600cc machines ridden by some girls from Austria - a Honda Transalp and a Ducati Monster. We quietly sneered at the need for 1300cc HDs, and BMWs with every gadget known to man bolted to them to go touring on.

However, the stormy conditions only got significantly worse as we left the harbour's mouth. Extremely high seas saw the ferry bucking and rolling all over the place. The sounds of retching could be heard pretty much all the way across the Channel.

A suitably dramatic end to what had been up to now an epic trip.