Another rake through the archives unearthed this. 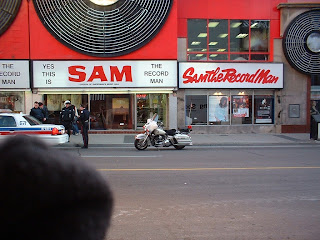 Although this picture has a decidedly American 'feel' to it, it was actually taken in Toronto, Canada while on a short holiday there a few years ago.
Toronto is used a lot by companies making films and TV programmes which are supposed to be set in the US as it, apparently, looks like an American city. It is also cheaper to film there, and the authorities are very accommodating when it comes to shutting streets off to allow car chases and such.
Posted by mr.combo at 21:17