Newcastle to Home
Distance: 120 miles / 192 km
Song for today:  Within a Mile of Home, Flogging Molly

The weather didn’t abate overnight and it was difficult to sleep due to all of the movement, so we woke tired and not a little queasy and decided to forego breakfast to be on the safe side.

Due to the overnight conditions we arrived in North Shields over an hour and a half late. On checking the bikes, for which we'd feared the worst, we found that the crew had been down at some point and put another couple of straps across each bike, so they were okay, and then when we finally disembarked it was to yet another bright and sunny morning.

Another border check, only this time on home soil. Asked where we'd been, we got the now standard, "Oh, wasn't it awful" response which we still didn't fully understand, having been pretty much out of the loop since we left. The bombing in Oslo and shootings elsewhere were still pretty much a mystery to us. I only found out the full details once I got home. 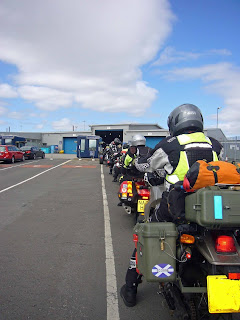 Anyway, one last effort and we'd be home. I stopped briefly at the border just north of Berwick on Tweed for a photo opportunity, before eventually arriving outside my door with a huge smile on my face and a truly massive sense of achievement. 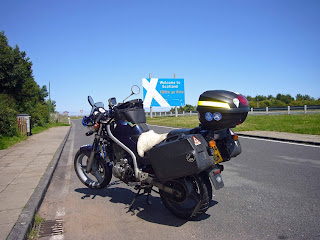 I was pleased too, with the performance of the Skorpion. It behaved impeccably and didn't miss a beat. Not bad for an old girl. Who says that you can’t tour on a smaller bike, or on a single?