Life in the Slow Lane

This was the first car that I ever bought. It’s a 1983 Trabant P601 Saloon in a fetching ivory/blue colour scheme. 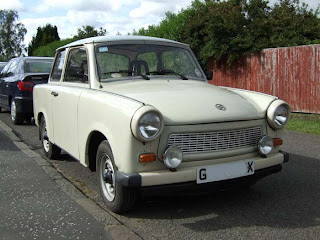 Produced in the former East Germany (DDR), it had a 600cc two-stroke twin engine, a 5-speed manual gearbox, and a top speed of about 60 mph (100 kph). Pretty much the four-wheel equivelant of the small two-stroke MZ motorcycles that I'd been riding. 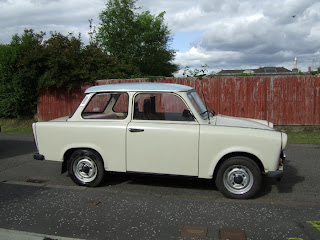 I’d wanted one ever since going to the 2003 Trabant-festival in Zwickau in German, the town where they were all built.
Only problem was that, at the age of 42, I didn’t actually have a car license when I bought it. I’d been riding motorcycles since I was 19 and had just never gotten around to getting my car license as well. 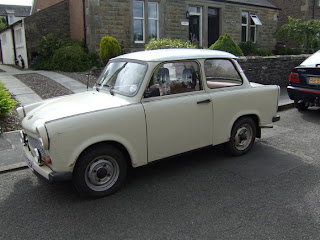 So, having bought a car, and after a mere twenty-odd years of thinking about it, I sat and passed my car test. Also, I guess, it was probably time that I join the world of the grown-ups and stop putting myself (and my bikes) through the hell of riding all year round whatever the weather conditions. Maybe I was just beginning to feel my age.
I had the little car for a couple of years before selling it for approximately what I’d paid for it. Not a bad deal all around. 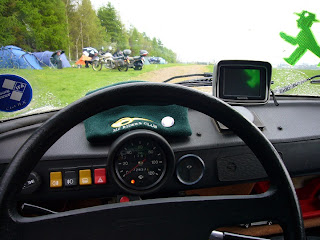 What was it like to drive? Well, besides being a bit on the slow side, it was 25 years old after all, it was quite fun. Left-hand drive for one thing, column gear-change with the ‘gate’ in a different format to what most of you will be used to, and rather marginal drum brakes. However, since I didn’t have years and years of driving experience to un-learn it suited me just fine. 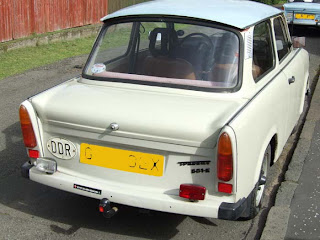 The wife, on the other hand, was less than impressed with it and insisted that I had to go and buy a ‘proper’ car as well. Good grief, I’d barely passed my test and already I was a two car household.
Posted by mr.combo at 20:42