We were up bright and early this morning. The ship is now on European time and we've managed to mislay an hour overnight. Despite our misgivings of yesterday, all the bikes survived the trip in one piece.

The plan for today is to cover the whole distance to Dijon in stages of about 100 miles or so to allow for sufficient fuel and rest stops along the way. All being well we should make our hotel in Dijon in about five or six hours.

The first thing worth a mention is that the weather is unexpectedly pleasant and it's time to dig out the sunglasses while packing the waterproofs away for the time being.

The trip passed without incident, although the last hour or so was a bit of a strain as our old joints complained about the forced inactivity.

The Hotel Kyriad, which Norrie had booked over the interweb, was conveniently located right in the heart of Dijon and had an underground car park where the bikes should be safe for the duration of our stay. A lot better than parking on the streets.

The only real problem that we encountered was right at the death. When we reached the town centre we encountered a lot of roadworks. This caused merry hell for our sat-navs which were frantically trying to find alternatives routes through the disruption and the new one-way system. The good folk of Dijon are having a tram network installed in their town, and the best of luck to them. I work in Edinburgh and the Council’s disastrous attempt to install a tram system there is well documented. At least we saw some trams actually running, if only to test the tracks. 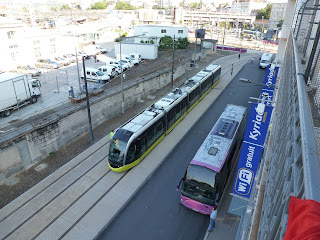 Anyway, we settled in and, as the long day had taken a lot out of us, did nothing more exciting that night than have a couple of drinks and something to eat before turning in for the night.
Posted by mr.combo at 14:29