A short ride this morning to the Dijon-Prenois Racetrack saw us arrive about 08:30 just as they were opening up for the day. We managed to gain entrance to the racetrack and began by wandering around the club stands looking at the bikes. Now then, this was what we'd come for.

It was quite staggering just how many different marques there were, both at the racetrack proper and in the parking area outside. It must also be noted that the more 'interesting' bikes (ie. the older and odder machines) were on the inside, while the more modern machinery on which most folk had arrived stayed outside, and I make no apologies for focussing more on the former than the latter.

I had thought that I had a good working knowledge of older bikes, but was soon confronted by a whole host of marques, a lot of them French for obvious reasons,  that I'd never heard of never mind seen in the light of day. My new favourite bike has to be the art-deco styled Majestic with its pressed steel bodywork and decidedly odd looks. 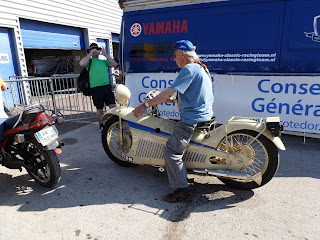 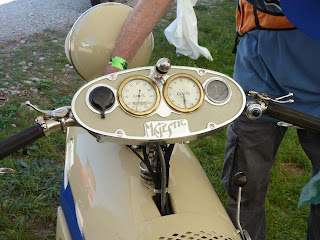 Particularly fetching were the brass edged clocks on the dashboard of this fully restored model.

After the club stands, we had a brief look around the trader’s area before heading on to see the racetrack and the race bikes. It's all extremely informal, as you can see from some of the pictures.

Most of the bikes are being fettled out in the open and people can just wander amongst all of this taking pictures and asking stupid questions of the folk doing all the work. Quite remarkable, really. I can't see this happening at Mallory Park later on in the year.

It got even more interesting when we discovered that they had opened up the pit area for the day and you could wander right up to the serious race bikes. 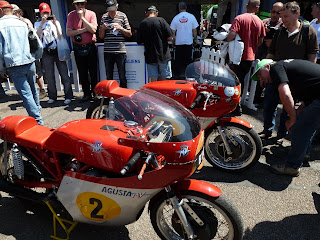 Gareth was much taken with the old MV Augustas, but then he has a thing for odd Italian race bikes currently running a Laverda himself.

Did I mention racing? Of course there was a lot of that going on in the background all day long. 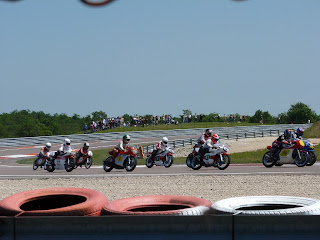 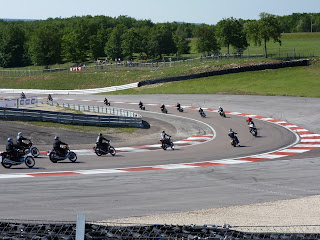 From the deadly serious to the more sedate demonstration type laps the day was punctuated by the roar of bikes whizzing around the circuit on open race pipes. We were even treated to the sight of old-timers like Giacomo Agostini, Phil Read, Jim Redman and others getting out on the track. Before we knew it it was five o'clock and we decided to call a halt to the day's proceedings. We must have walked for miles and it seemed even hotter today than yesterday.

By the time we decided to leave we were all extremely tired and burnt to a frazzle.
Posted by mr.combo at 18:07