Even though there was no great hurry we were up early once again. Gareth and I were heading north to Reims, en-route for home and work commitments, while Norrie was planning to head south to take in some of the high passes and spend about a week touring on his own.

Rather than attempt to make it all the way back to Zeebrugge in one go we had earlier decided to head instead for Reims, which was roughly half way. The deciding factor was time. If we tried to make it a single trip and encountered any problems we would in all likelihood miss our ferry home. So, it was to be a two day canter, rather than a one day sprint. 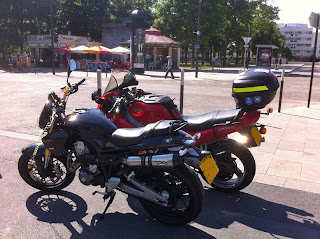 We had decided to stay off the AutoRoute initially, so headed for Troyes which, again, is about halfway, on the A-roads instead. This was much more pleasant, riding through some countryside for a change, rather than hurtling along with all the trucks and rest of the traffic. Traffic was mercifully light and we just ambled along taking in the French countryside, passing through small villages and just relaxing. It was very pleasant after the hectic pace of previous few days. At one point we passed through a small village whose war memorial had a US tank and a Jeep mounted on plinths. We were past it before it really registered so that’s why there are no pictures.We eventually reached Troyes and stopped for fuel, a sandwich and a bit of a break.

All good things must come to an end and we made for the AutoRoute and the monotonous part of the day’s journey. We made good time after rejoining the AutoRoute, but on arriving in Reims we experienced a sense of deja vu as regards one-way streets and confusing road signs, but overcame it all by the simple expedient of riding up a bus lane and over a pedestrian forecourt to the hotel which we could clearly see but not fathom how to get to by proper means.

The Hotel Le Crystal was reached by way of a passageway off of the main street and it opened up into a pleasant shady courtyard. 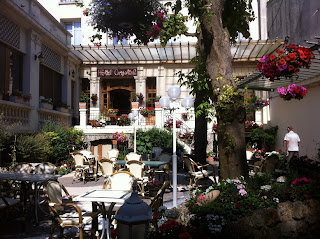 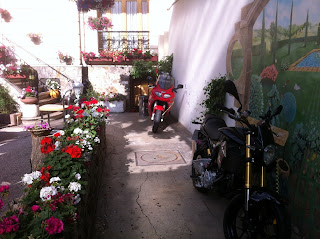 The receptionist said that we were welcome to park our bikes at the side of this courtyard if we wanted to bring them in off the street. This necessitated a bit of a tight squeeze past the tables at the intervening restaurants on the main street. We pushed rather than rode the bikes past the diners. Wasn't that kind of us?

So, after getting settled in and tidying ourselves up a bit we went for a look around. Outside the hotel were any number of eateries and we were somewhat spoiled for choice. In the end we plumped for The Glue Pot for no better reason than that we found the name amusing. 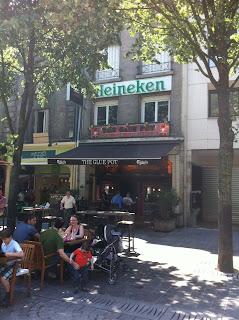 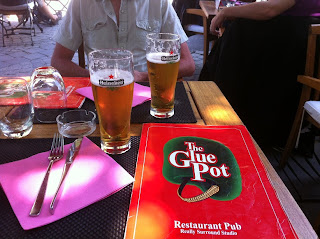 A bit later, after a cold beer and a something to eat we felt a bit more human and set out for a bit of a wander around the old town. 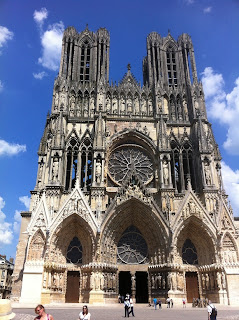 Reims is a fair bit bigger than Dijon, with a rather spectacular cathedral; Notre-Dame de Reims (Our Lady of Rheims), the interior of which is simply awe-inspiring, which I guess is the whole point. 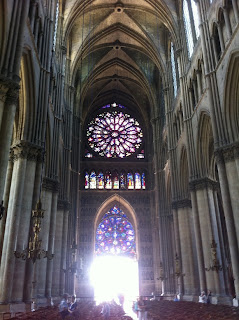 The kings of France were crowned and anointed here, which might explain its grandeur and the size and number of ornate public buildings and obvious success of the town. 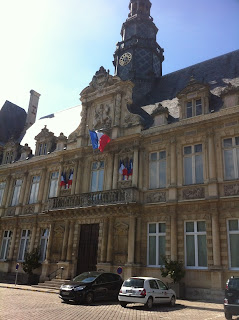 As for the rest, it was all quite ordinary tourist fare and then, quite unexpectedly, down an ordinary street, we came across this. 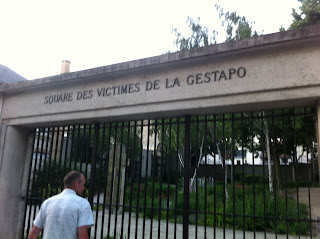 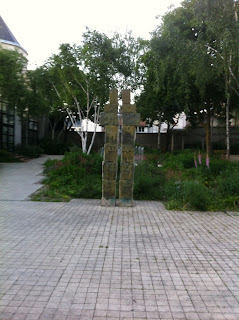 A memorial garden for the victims of the Gestapo during the German occupation of WWII. It's very simplicity was remarkable.

Back at the hotel we spent the remainder of a pleasant evening in the shade in the hotel’s courtyard before venturing out once more for our evening meal. 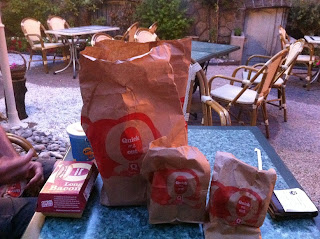 I'm afraid to say that we ended up in a local burger franchise as we couldn't find anything resembling a sandwich shop and had no desire for another big sit-down meal.

A suitably low-key end to our last night in France. Time to head for home tomorrow.
Posted by mr.combo at 10:43