Well, that's it all over for another year. A thoroughly enjoyable week spent overseas in pleasant company, having taken in a fantastic bike event, and with some decent weather for a change as a bonus. As I write this my badly sunburnt arms are peeling nicely. This time next week I’ll be as pale as I usually am and no one will know that I’ve been anywhere! 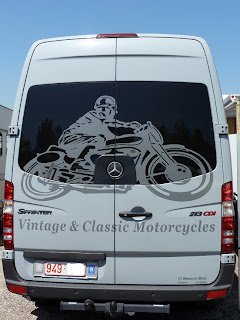 Would I go again? Yes, I would actually. It would probably be a good idea to leave it a couple of years before going back, but I can see myself making the journey again at some point.

On the matter of travelling to other countries; I’ve never really understood those who think that going abroad on a bike must be too hard or too difficult. I’ve been all over the place in the last 10 years or so and have never had any great difficulty even though I don’t speak more than a smattering of any foreign language. Learn how to say “please” and “thank you”, numbers from 1 to 10 for petrol pumps, and for the rest it’s amazing what you can get by with just pointing and smiling. If you really want to go one better, do some evening classes and expand your vocabulary. One friend actually met his wife at a class he went to for our trip to France in 2008.

However, the next thing on the agenda is to start planning where we'll be heading for next year. The current consensus is to make for Italy in July and the Stella Alpina Rally in Bardonecchia on the French/Italian border. Watch this space, as they say.