Another day and another move. Load the bike up, and off we go. This seemed all too familiar. Today we had a straight run to Zeebrugge. A couple of fuel stops and we arrived around lunchtime without incident.

I’m not that familiar with Zeebrugge port, having only been there once about ten years ago. Gareth on the other hand knew it quite well and suggested that we head for a surf-shack bar on the beach along from the port where we could kill some time rather than head straight for the ferry and hang around till it boarded that evening. So that's what we did. 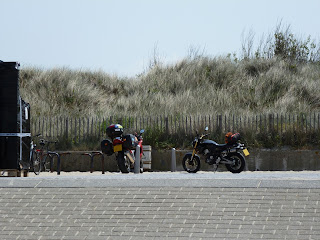 As advertised, it was right on the beach and relatively quiet, it being mid-week. We parked up and sat in the shade with a can of juice and just chilled. It was nice to sit still after all of the hectic activity of the last week. 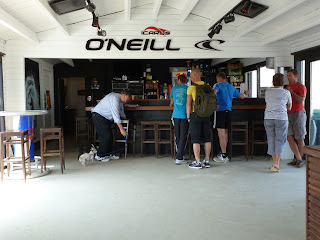 Eventually we gathered ourselves up and made the short hop to catch the evening ferry to Hull. Nearly over now.

Having been congratulating myself on encountering no gremlins thus far on the trip the hammer came down as I sat on the quayside alongside the ferry, proving yet again that the universe loves a good laugh at the expense of us mere mortals. 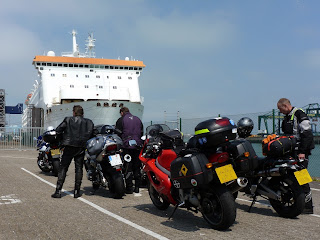 When I bought the Triumph it came already fitted with a Datatool alarm/immobiliser which has, on occasion, proven to be rather temperamental. Today, after making it through customs and onto the quayside I couldn't turn the bloody thing off. The key fob remote control simply refused to disarm both the alarm and the engine immobiliser. There I was, sitting literally within touching distance of the boat with the alarm having armed and with no way to turn it off. My attempts to move the machine just set the alarm off. Eventually I had to give up trying to get it started and, after waving Gareth on ahead, had to push the bike onto the ferry with the siren skirling away, much to everyone's amusement.

The reason for the failure? According to one of the folk loading the boat the radio frequencies used on the docks often over-rode vehicle alarms and even electronic door locks on occasion. He admitted that this was quite common and that they were accustomed to having immobilised vehicles pushed onto the boat. He reckoned that once off of the quayside and away from the radio signals everything should go back to normal, and so it proved. Having tied the bike up I decided to give the alarm one last try before heading for my cabin and lo and behold it worked fine. Bloody technology! They don’t mention this sort of thing in the adverts.

After all of that I decided that I needed a beer to cheer myself up.
Posted by mr.combo at 11:34