After all the planning and anticipation, the day had finally arrived and, as a bonus, it dawned bright and sunny for a change. A short hop to North Shields and we'd be on our way. The bike itself was as ready as I could make it, and everything was packed ready for the off. 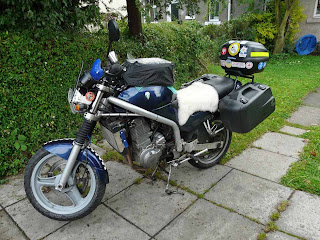 As you can see from the picture, I had managed to fit pretty much everything I was taking inside the hard luggage, with little left outside to tempt thieves or to simply fall off. The tank bag can't be removed without removing the seat, so it and it's contents were as secure as I could make them, and I usually removed stuff like my camera when I parked up. 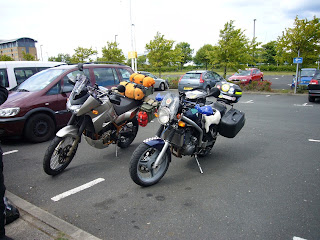 We weren't leaving until 5pm, so I had a leisurely trip down to the ferry terminal, where I met up with Gareth and his Kawasaki KLE500 at a nearby restaurant. We talked over what we hoped to do once in Norway and had something to eat before booking in.

While I was waiting for him to arrive a bunch of Harley boys pulled up next to me. All open pipes, open-face helmets and sunglasses. You know, the usual uniform. They had to pass me to get inside, but managed to not only completely ignore me, but make sure I knew that they were completely ignoring me. Why do so many HD owners (and funnily enough, BMW owners, too) feel the need to do this? 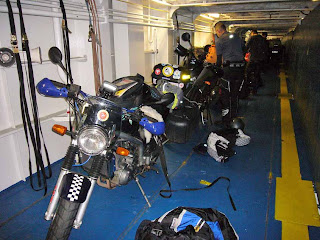 Anyway, once on board we secured the bikes and headed for our cabin to get changed and settle in for the voyage. Next stop, foreign shores.