Another long day today, as well as another bright and sunny one. We were up early on the boat to watch the Norwegian coastline pass by. The wooded slopes of the fjords were peppered with small cabins and larger houses of a style that we were to later become familiar with on our later travels.

Once disembarked we left the city behind and headed north along the country's main road, the E6, which runs all the way from Oslo in the south to Nordcapp in the north. Unfortunately, we hit that seemingly ever-present feature of roads everywhere, roadworks. Unlike earlier in the trip these didn't hold us back too much as the traffic was generally much lighter.

The lengthy tunnels around Trondheim, some over 4km (2.5 miles) long, were a bit of a shock to the system, as was the locals' habit of overtaking in them (no speed cameras in there). What speed cameras we saw were strange to our eyes, looking more ‘steam punk’ than high-tech. 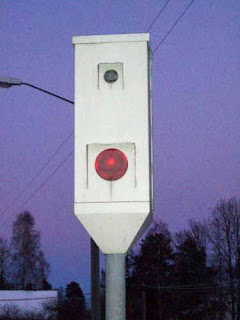 The general standard of driving, however, was generally good, but slow. Outside of the cities drivers tended to strictly obey the speed limits, and this did take some getting used to. These limits ranged from 50 km/h (30 mph) in town to 80 km/h (50 mph) on most other roads, and even then most drivers tended to stay about 10 km/h (6 mph) below the posted limit. It was frustrating at first, but gradually you got used to it and you found yourself adjusting to the general rhythm around you. The slower pace is actually quite relaxing and you're able to take the time to look around more as you travel.

I was rather amused to note that the general bikers' head nod seen in the UK had been replaced with a rather laconic wave of the hand. Just lift your left hand off the bars and let it wave in the wind when you encounter another rider. Very cool. 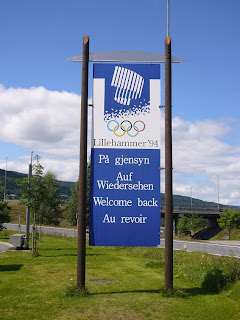 Our first main stop today was in Lillehammer for a bit of a break and something to eat. The skyline there is dominated by the former Olympic ski jumping run, which you can see from pretty much everywhere. 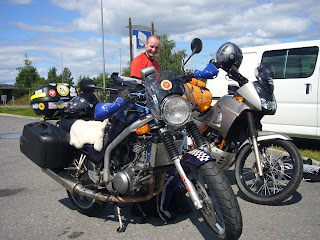 Eventually we pulled into a campsite near Oppdal for the night, having managed to travel further than we had expected today. The slower pace of the roads and the remarkable scenery meant that we weren't actually that tired, and we only really stopped because we felt that we should. 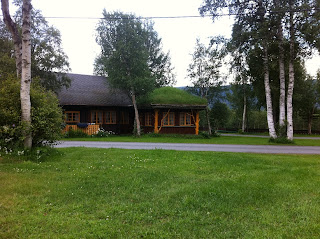 The reception building was quite novel, this was the first time we were to come across buildings which had turf on the roof, and this one also had roof supports which were actual tree trunks.

Having put up the tents, Gareth broke out some military ration packs for our evening meal and I was pleasantly surprised at how palatable these were. A vast improvement over the ones which had been on offer the last time I'd tried them.

I also broke out one of my emergency supply of whisky miniatures. I felt that our first day in Norway should be properly celebrated.