Korgen to Kyrksaetorora
Distance: 335 miles / 540 km
Song for today:  Walk on By, The Stranglers

The day started almost immediately with an 8.3 km (5 mile) tunnel, which was bloody frightening, and then we had all the other tunnels around Trondheim to do again as well.

A planned detour to the town of Hell to take some photos had to be cancelled when roadworks meant we couldn’t get onto the access road. 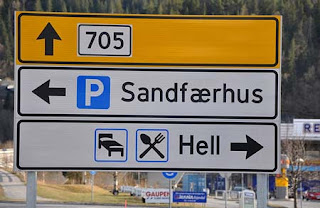 So, although we haven’t actually been to Hell, we have been on the Road to Hell.

Our parents would have been so proud!

While stopped for fuel we decided on lunch at a little roadside café where we encountered what seemed like the only Norwegian who didn’t speak English. Ordering was a bit hit or miss and we only really found out what we'd asked for when it arrived. While eating al fresco we watched  a couple of big bad bikers: choppers, backpatches, Capt. America helmet et al., putting their bikes through the jetwash at the service station. Nice to be able to Live the Dream!

Today was a longer day than expected as there were fewer campsites than we had become accustomed to further north. We were thinking about giving up looking and doing a little wild camping when we came across a nice little site tucked away at Kyrksaetorora, which even a Norwegian I spoke to admitted finding difficult to pronounce. 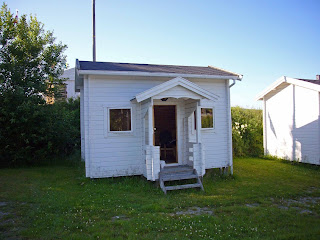 We booked into another cabin here which was, bizarrely, cheaper than camping. The cabin was the biggest of the trip and could have easily slept six quite comfortably, although you might not guess that from the outside. 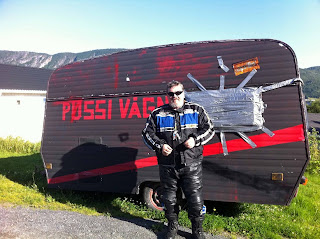 We passed on the ‘alternative accommodation’ - The Pussi Vagn'.

This campsite, like many others, is set up for fishing, but this one had outdoor tables and sinks for gutting and cleaning any fish caught (on the right), and a smoke house for cooking and preserving them (the white building), as well as a small harbour to moor your boat . 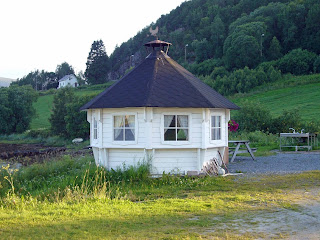 We found out to our cost, however, that Norwegians can’t buy beer after 6pm on a Saturday when we arrived at the shop at 6.15pm. So, no beer for us today. 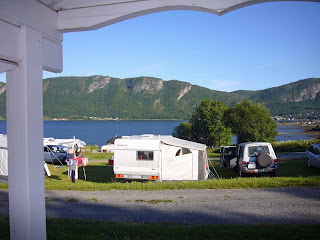 The above is the view from our cabin door, the one below was taken from the beach. 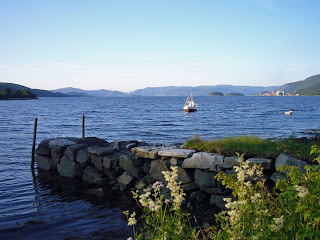 There was a definite change of scenery today. At first pastoral, then industrialised, before changing to mountainous and heavily wooded where we ended up along the west coast. This is more like the sort of look I associate with Norway. Towns clinging to the steep slopes of mountains overlooking water. And just think, it's only taken us a whole week to get here.