A bit colder today, but still bright. That's probably because we'd been heading steadily north and the road had been climbing higher. At one rest stop, Gareth broke out some chocolate from one of the military ration packs. This was a Yorkie Bar marked 'not for civvies' (civilians), which made us chuckle. 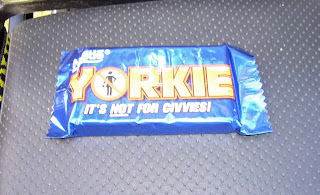 We spotted a number of 'funny cars' today, some being driven while others were on trailers. It's possible that there is some sort of a rally hereabouts. 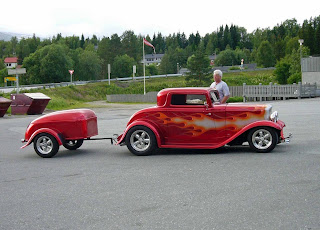 After seeing this particular one a selection of songs by ZZ Top featured on my internal jukebox for some reason. 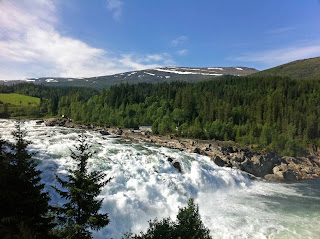 However, all this great weather we'd been having couldn't last, and we encountered our first rain of the trip. First a bit of a shower, then it got progressively heavier until we were riding in a downpour. It was time to look for somewhere to stay.

Rather than have to put up our tents again, we booked into a cabin for the night. The cabin was quite swish, with 4 bunks, a kitchen area, electric lights etc. and, as an added bonus, it only cost us 10 NKr (about £1) more than putting our tents up the previous night. Before I left home I had spoken to another friend who had been to Norway and he reckoned that the cabins were so good and relatively cheap that he didn’t bother camping after his first night. I can definitely see the attraction. 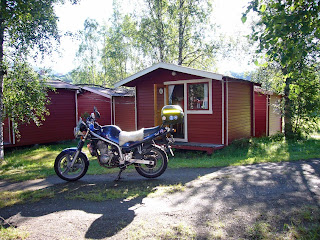 We now had a decision to make regarding what to do tomorrow. We were still about 160 km (100 miles) short of the Arctic Circle, and that after two full days travelling. Having looked at the distance still to be done we decided that the sensible option would be to make a run to the Arctic Circle the following day and then, rather than stop over there, come straight back and book another night in the cabin.

Having decided on a plan it was time to relax a bit.