I’ve managed to put some miles on the Skorpion in the last week or so. However, there were a few things that I was unhappy about, mostly niggly noises and quite a bit of vibration. Also, the engine felt a bit ‘tight’, and I wasn’t overly happy with the pick-up on acceleration. It all worked fine, but I just had a feeling that it could be a bit better.

The problem is that it's been so long since I actually rode the Skorpion that I could have been getting upset about nothing. My main bike since last summer has been a Triumph Sprint ST, a big triple. A triple is always going to be less prone to vibration than a single, and acceleration is in a different class to the Skorpion.

I thought that a comparison ride would be useful, so asked Terry (MuZ660) if he’d care to lend me his Tour for a bit to try and get a feel for how it compared to mine. He said yes, and offered to come over as he was fitting some sealant glop to his tyres and he wanted to take it out for a run afterwards anyway. He said that he’d be over on Sunday.

Before that, however, I did spent much of Saturday working over the Skorpion.

Checking things again I discovered a couple of perished rubber hoses, so changed them for new. I replaced the coolant, which is a ten minute job, and removed and set up the carbs, which were mostly okay. When I checked the valve clearances they were a bit tight, so I opened the gaps a bit. I now get a little more noise, but slightly less vibes.

Note: I wouldn’t ordinarily do two or more things at the same time, as it can then be difficult to work out what changes have actually done any good, but I’m running out of time if I want to take it on holiday. 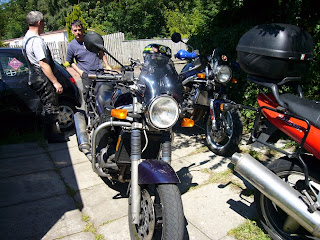 It ran a lot better after this work and when Terry arrived on Sunday we took each other’s bike out for a short ride. The good news is that we both agreed that there wasn’t much to choose between the two, so called it a day. Uncle Norman also turned up and we settled in for a chat fuelled by tea and biscuits (hardcore biker dudes!). 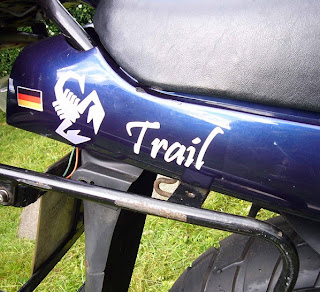 Oh, and if you remember back a bit, I decided that with all the changes the bike should now be called a Skorpion Trail. I had some vinyl cut and it now says Trail on the tailpiece.