We had a much shorter day today, but still spent a good few hours in the saddle. Rather than take the major roads, we decided on a route which took us along smaller roads running alongside the main fjords towards Alsdalsnes and the Trollstiggen road. 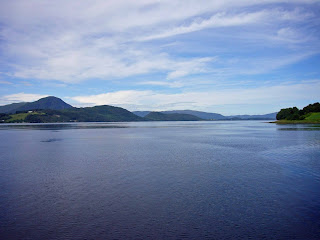 After a peaceful morning spent swinging the bikes along these smaller roads, we caught a small ferry from Kvanne. 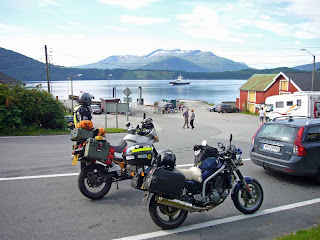 After which we went on a bit of a sat-nav detour, leaving the main road for a while, before re-joining it further along. The road we took passed through an area of fruit farms where the pickers were out in force. They looked somewhat surprised to find two bikes buzzing along the road besides the fields. 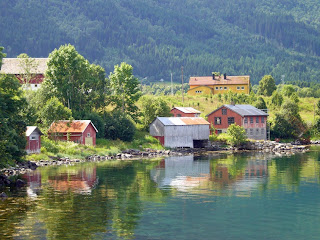 We also encountered our first big road over the mountains today, a practise run for tomorrow’s assault on the Trollstiggen, as well as a good few tunnels, too. These were darker and danker than the big ones around the bigger cities.

When we eventually arrived at the campsite at Aldalsnes, it turned out to be both larger and more expensive than we'd expected. So much so, that putting our tents up was to cost us more than the cabins we’ve already stayed in. 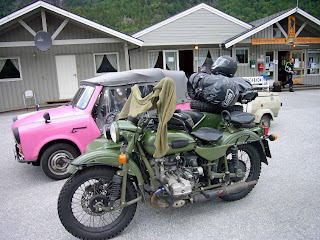 On riding up to reception we had to manoeuvre around this Ural outfit and pink Trabant Kübelwagen with trailer, both on German plates. 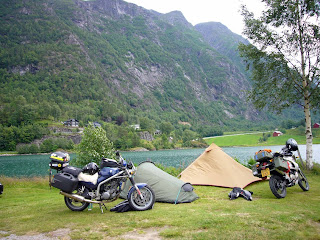 What’s worse than no beer after 6pm on a Saturday? Yes, that’s right. No beer at all on a Sunday. We did notice that you could buy knives the size of small swords, but no alcohol. Good god, it’s like the Dark Ages or something. Good job I brought my emergency whisky ration.

We settled for ordering a can of lager in the site café. This came to about 6 quid, but we reckoned that we deserved one (but only the one).

The road to the Trollstiggen ran through the campsite, and there were loads of big bikes passing in both directions all evening on their way over the mountain. Although it had been sunny all day, it began to cloud over that evening with a bit of a strong wind getting up and the threat of more rain to come. 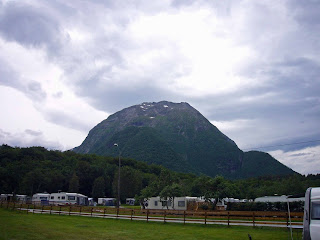 I was a bit worried about going over the big road tomorrow if it stayed like this.