It was an unpleasant day today, wet and cold for a change. I was in a poor mood when I woke up for some reason, so wasn’t in the best frame of mind to start with. Probably at least partly down to the fact that the actual holiday bit is nearly over and all we have now is the long trip home to look forward to.

We packed up and headed south and the road began to climb steadily up into the treeline. The day began grey and overcast, and before too long it began to rain. The higher we went, the heavier the rain got. With only the occasional respite it rained pretty much all day. It was noticeably colder, too. We were definitely in mountain country now, where previously it had mostly been coastal or farming. 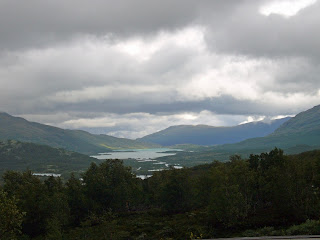 It seemed as if we were riding through clouds strung across the road, with mist and rain making it difficult to determine the edge in places. This was obviously not an unusual occurrence as we rode along a stretch of road lined with saplings which had been stripped of their branches; I took them to be snow poles to locate the road. These were about three metres high and placed every three or four metres or so along both sides of the road. A bit eerie in the circumstances, they looked like they should have the heads of defeated warriors impaled on them. Or maybe I just have an overactive imagination and have watched one too many movies? 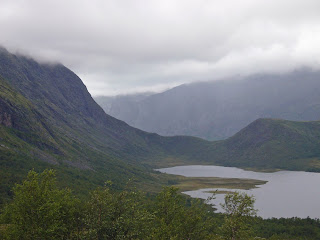 The road twisted around the occasional lake with the odd cabin scattered about their shores. It all looked rather lonely and desolate, but that was maybe more to do with the weather and how I was feeling than the actual location. We did pass a sign for a naturist/nudist resort up in the mountains. Wonder how they cope with this sort of weather?

Eventually the road came down out of the worst of the weather and we stopped and booked into a cabin just outside the small town of Hov. This site was by a fjord and the cabin was the smallest so far. So small in fact that I felt we should be popping out the door every hour or so to shout ‘Cuckoo!’ 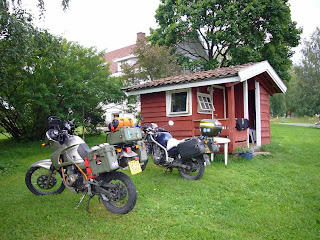 We made ourselves at home and then did a run to town for supplies (although we decided against these lovely products) and that was pretty much that for the rest of the day. 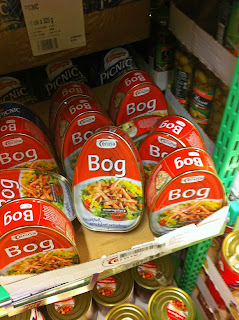 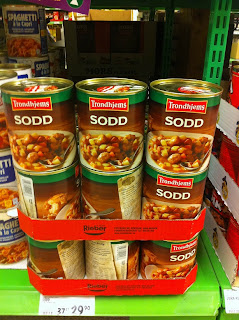 What with the weather and the continual travelling, our spirits had taken a bit of a beating today. All so different from the high of yesterday. A days rest is definitely called for.