I have been making noises about going to Norway on the bike for some time now. While at Gairloch last year for the MZRC Scottish Rally my mate Gareth called my bluff and said that he'd always wanted to go as well, so why didn't we go together? I said that that was a great idea (alcohol is a terrible thing, it should be banned!), and we agreed that we'd go in the summer of 2011. That's now here, and we should be heading off tomorrow. 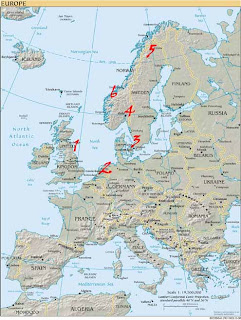 The Trip
The main problem with getting to Norway is that there is no direct ferry link from the UK any more, and certainly not from where we are in Scotland. So, getting there is difficult in itself and can seriously eat into your holiday time. Half of our trip will be spent just getting there and back.

It is possible to catch a ferry to Copenhagen in Denmark from Harwich on the south coast of England, but that would involve a trip of at least one day, and possibly two, at the beginning and end of the trip covering the length of mainland Britain. Neither of us wanted to do this.

It made more sense, we felt, to start in Newcastle (1), which is only a couple of hours away for both of us, take the ferry to Amsterdam (2) in the Netherlands, and then ride through northern Germany to Copenhagen (3). From there we will catch the second main ferry to Oslo (4) in southern Norway. Actually, just writing that has made me tired!

So that's what we're going to do. We've booked return ferries from Newcastle (South Shields) to Amsterdam (Ijmudjen) and from Copenhagen to Oslo. On the way out we have a hotel stop in Germany, with another on the return trip.

The time taken to do this is about the same as travelling from Harwich, except we will mostly be travelling on foreign shores and on arriving back on the last day all we have ahead of us is a journey of a couple of hours rather than days.

The Plan
Well, actually, here I've got to admit that there isn't much of one as neither one of us is too wedded to the idea that every waking second must be planned in advance and every eventuality anticipated. The only really fixed parts of the trip so far are the ferries we need to catch and a couple of hotel stops in Germany. Other than that, we mostly intend on making it up as we go along. 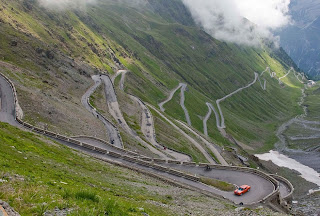 Once we reach Norway proper, the intention is to ride in a big anti-clockwise loop through the southern part of the country. Starting in Oslo we will be riding north to just above the arctic circle (5) so that Gareth can say he's camped there (masochist), and we may spend a day or so there before heading south and west, down the coast with its mountains and fjords to ride the spectacular Trollstiggen roadway (The Troll’s Ladder) in the picture above (6), before finally looping back to Oslo once more to catch the ferry home.

We have decided to give Nordcap a miss, even though this seems to be the big destination for bikers, we won't be going that far north. Norway is, after all, a pretty big country, and I don't plan on spending the entire trip riding two or three hundred miles a day just to say that I've been to an expensive visitor centre at the tip of the back of beyond (think Lands’ End or John O'Groats and you've an idea of what I mean).

Everything else will be in the lap of the gods.

Blog
I'm hoping that, with access to modern technology it will be possible to send photos and updates back home. So I might be able to post some stuff while we’re away. On the other hand, I might not. Only time will tell. Regardless of what happens, do expect the odd blurry photo and inane ramblings about Vikings and fjords to appear here once we’re back.