Today was a relatively short day, with another small ferry crossing from Puttgarden in Germany to Rodbyhavn in southern Denmark, then a quick scoot across country to Copenhagen where we were to catch the big ferry to Oslo and Norway at long last. Still just another day of travelling, unfortunately. 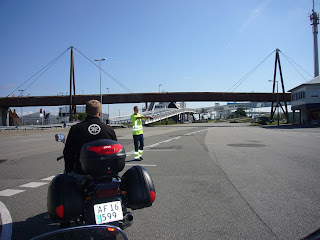 The small ferry put many of the bigger operators to shame, although Gareth was amused to see that some of the crew were sporting hi-viz shorts, shorts being on a long list of banned apparel for workers under UK Health & Safety measures, apparently.  On board were obviously permanent and well thought out strap-down positions for bikes along both walls (hulls?) and everything was done with the minimum of fuss.

Once the bikes were secured, we made our way to the outside deck and sat in the morning sunshine as we left Germany behind and headed, at last, for Scandinavia.

The trip across Denmark to Copenhagen was unremarkable and, as the ferry terminal is a ways from the centre of the town, we didn't even get a chance to see that perennial Danish landmark the Little Mermaid statue in the harbour. Personally, having been before, I don't think that it's worth the effort.

While waiting around at the terminal in Oslo we got talking to an American couple who had recently toured around the UK on hired Harleys. The husband seemed a very keen motorcyclist, as well as an avid whisky buff. His suggestion for dealing with rain? Pull over, put on your poncho and wait for it to pass. We did suggest that were he to try this in Scotland that he'd likely have a very long wait! 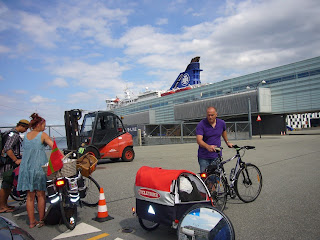 The DFDS ferry to Oslo was a bit shambolic. Once on board a rather brusque crew member chucked a basket of not very strong tie-down straps at us and left us to try and sort ourselves out. No provision had been made for carrying motorcycles and there was no real way to tie the bikes down properly. Having done the best we could, we just prayed that we'd have a calm crossing.

As the boat sailed out of Copenhagen we went out on deck. The route took us past a number of small islands complete with lighthouses and fortifications from a bygone age to remind you of Denmark's military past, and In the distance we could see the Öresund Bridge linking Denmark with Sweden. This is an impressive piece of engineering, but I imagine that it is a daunting prospect on two wheels in anything but perfect weather conditions.

Light relief was provided by a small boat crew showing off by crossing and re-crossing the boat’s wake, becoming airborne on each pass.