We awoke to yet another beautiful summer morning. What a contrast to yesterday. Today was to be our first real rest day of the trip so far. Quite nice to get up and not have to think about packing everything for a quick getaway.

We had no regrets about not pressing on. It was less than 150 km (95 miles) to Oslo and it didn’t seem worth moving today. The idea was to recharge our batteries as we’d been piling on the miles recently. We will have another few long days once we leave Norway, so having a bit of a break looked like it would be a good idea.

A lazy morning then, and after lunch I went for a quick spin in the sunshine. Clocking up the lowest mileage to date, only about 100 km (60 miles). 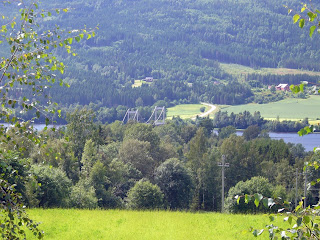 I stopped and took the occasional photo now and again, although the landscape we found ourselves in now was nowhere near as dramatic as some other places we’d been so far. 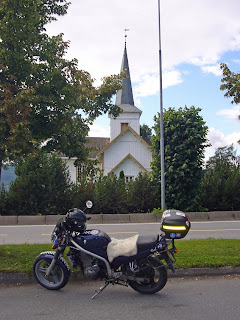 The local church in Hov seemed to be built on the standard wooden church pattern we’d seen elsewhere in Norway, and I did come across this small war memorial on my run. There wasn’t much in the way of information on it, but it appeared to be well looked after. 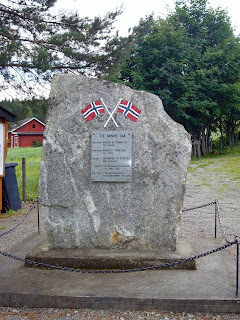 While we were about it, we took the chance to give the bikes another once over. I found that my Scottoiller was empty, so that was refilled, and a little more oil was needed for both bikes - that’s about a litre so far for the Skorpion. The stoneguard on the headlight was doing a sterling job of killing insects if nothing else, and Flossie could really have done with a bit of a clean, which would have to wait, but it was doing a grand job so far. We also took the opportunity to re-pack all our luggage as we’d been merrily abandoning kit as we’d been travelling. Take older clothes with you and just leave them behind once you’ve worn them a couple of times. This leaves you with room for anything you pick up on your travels.

The rest of the day was spent chilling, mostly sitting around people-watching from the veranda of our cabin, beer in hand. And, yes, we probably did look like a couple of hillbillies. 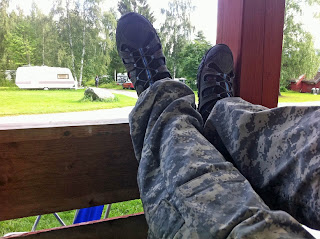 One family had actually brought their cat on holiday and it followed their teenage daughter around, and at one point it got taken for a walk on a lead. It was that sort of a day.