Korgen to Arctic Circle, and back again
Distance: 240 miles / 380 km
Song for today:  Wish You Were Here, Pink Floyd

After the disappointingly wet end to yesterday we woke to a beautiful day with hardly a cloud in the sky. The plan we'd agreed on called for an easier day than we'd had of late, only about 200 miles in total on a round trip to that spot on the map identified as the Arctic (or Polar) Circle at 63° 33N. 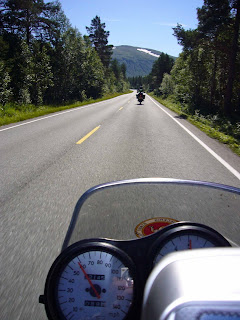 Leaving all of the luggage behind in the cabin we had an easy enough run up to the Polar Circle Centre (Polarsirkelen) where we took some photos and had a spot of lunch. For anyone wanting to forever scar their childhood memories of Rudolph and his chums there was reindeer soup and reindeer stew on the menu. 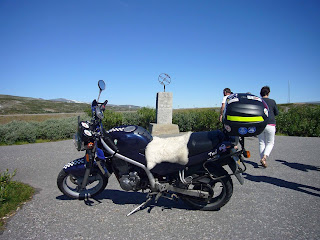 It was quite surreal sitting out in sunshine and the warmth. Not what immediately springs to mind when you hear the words 'arctic' or 'polar'.

On the way back we made a small detour to take a look at the Arctic Circle Raceway, which was unfortunately closed when we got there. So we settled for posing for a few photos outside instead. 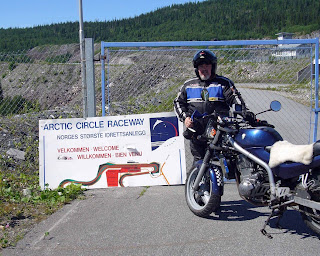 We had been congratulating ourselves for being on the smallest bikes that we'd seen so far when we passed a lad on small Honda 125, loaded for bear, and heading north. Good luck to him. 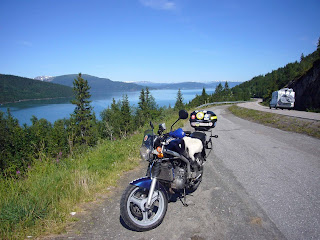 The run there and back, along the lakes, was amazing. The scenery around every corner just seemed to get better and better. A run in warm sunshine, mile after mile with beautiful surroundings, does you good in ways that are too difficult to explain. Either you get it or you don’t. It's like you’re recharging your soul. All very hippy trippy, I know.

Once back at the cabin we took a little time out to attend to some routine maintenance for the bikes. Nothing serious, mostly just topping up the oil, adjusting the chain, and checking everything over. I did have to do a bit of work on the sidestand, though. Remember I had replaced the original with a supposedly hardier one? [sure-footed] As it turned out, it wasn’t, and the top mount had bent again. The added weight of the panniers, as well as tying it down while on the stand on the ferries had opened out the top brackets and the bike was now leaning at a perilous angle again.

I wanted to close the top brackets, but lacked anything to do the job properly. Luckily there was a garage opposite the campsite and I went in and borrowed a muckle great big hammer from Olaf the Troll (his name probably wasn’t Olaf, and he wasn’t a real troll, but this was Norway and I’m trying to get into the swing of things, okay?). The hammer a mini sledgehammer which I used on a small anvil to put things to rights, ie. beat the living daylights out of the stand until the brackets were back where they should have been. Emergency over for now.

As we had the rest of the day to chill we made a trip to the local supermarket and picked up some food and a disposable BBQ. That night we had sausages for tea. 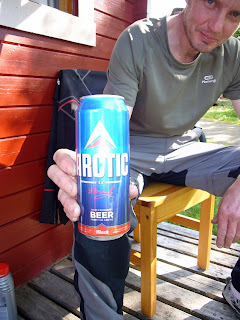